Hey gentleman and women of Future! Hope your’e all having a great day. Wanted to release my special technique for remediation of just about every single unwanted compound from your extracts. This works with Butane, Ethanol, and Hexane. It is slightly more effective with Alkanes due to their non-polarity and the polar attractant nature of the filtration medias, but the medias are still more polar than ethanol resulting in them still working just less efficiently.

My goal in these experiments when using hexane or ethanol as my solvent was to remove as many impurities as possible and to create a crude oil that required no pre or post processing before or after first pass distillation. My other goal with butane was to remediate as many impurities as possible and come out with a high clarity low color shatter even from older material. Both goals were achieved.

Now onto the technique!

The simple explanation is that you use adsorbent medias that target certain compounds in conjunction with each other to remove as many impurities as possible with a single pass, without the media being under or over saturated. Over saturation of your media means that impurities will pass through without being grabbed. Under saturation of the media would cause the media to hold onto cannabinoids and give you a loss of yield. This is why the ratios and understanding what each media removes is important, and why the order they are used in is important. I will explain briefly what each media targets.

-Activated Magnesium Silicate
Activated magnesium silicate has the perfect pore size to grab lipids. This makes it a prime candidate to be the very top media in your stack. If your method of extraction brings along any lipids, removing them first with magnesium silicate will make all the rest of the medias much more effective.

-Activated Silica Gel
Activated silica gel adsorbs chlorophyll, carotenoids and other hydrophyllic impurities. These are your dark greens and oranges. Silica Gel does the heavy lifting for remediaton of very dark colors.

-50/50 PVPP/Activated Carbon blend
Polyvinylpolypyrrolidone (PVPP) Is an adsorbent that removes tannins, polyphenols, and oxides. These include alot of your more red colors. Activated Carbon helps grab any remaining chlorophyll and allows the PVPP to flow better since it is an extremely fine powder prone to clogging. I generally blend even volumes of both powders before packing, no one sells this pre-blended that I know of.

-Activated Bleaching Earth
I buy my activated bleacing earth from Anovia Group. Its the best bleaching earth I’ve had the pleasure of using and priced very competitively. It has worked better for color remediation than t-5 or t-41 and is much cheaper. Activated bleaching earth is the final filtration media and is used last when all impurities have been removed and you are just trying to lighten the color of your extract and remove any remaining pigments.

-A7 Proprietary Media
This is a media a friend developed and is beginning to sell. I had the pleasure of testing this for him and loved it. This media is optional and would be the final step if you choose to use it. This is a good adsorbent treated with a lewis acid. The lewis acid helps convert cbd to cbn. The use for this media is for people who are going for ultimate thc purity on first pass. By converting cbd to cbn it allows the cbn to be distilled into the tail fraction instead of the main body, which gives you a higher thc purity.

Calculating ratios:
The best way to calculate ratios is to estimate how much finished oil your material will produce. Weight of material being processed multiplied by the percentage of cannabinoids available. For example a ten pound run of material (4480 Grams) containing ten percent cannabinoids would produce an estimated 448 grams (4480*0.1). From this estimated yield we can calculate how much media to use without over or under saturating the adsorbents.

-Flow Considerations
How fast you’d like to complete a cycle and how much material you are running per cycle will decide the width of your filter column. In my experiments with 10 pound runs, a single six inch column sufficed and allowed me to complete a cycle in two hours. A simple way I’ve found to estimate the necessary column width is to start with 10 pounds being a 6 inch column and every time the weight doubles add 2 inches to the filter width, so for a 20 lb cycle an 8 inch column would be good, for a 40 lb cycle you would want a 10 inch column, and for an 80 pound cycle you would want a 12 inch column.

-Packing the column
Packing your column correctly is mandatory. An incorrectly packed column will have channeling and improper flow. Improper flow means improper adsorption by the media. To pack my columns I set up the filter plate either with a 5um bottom paper and a 25um top paper or with a 4um sintered filter depending what is available to me. I then put a reducer on the bottom of the filter plate and the spool on top and attach it to a vacuum. I slowly add media while tapping the sides of the spool very hard with a 1 pound rubber mallet. I then use a flat cap to pack the layer down as flat as possible. Then I use a mesh screen with a drop in filter plate on top of the layer to press it with a hydraulic press and make it completely flat and even. I have had success without the press, just using vacuum, many times but there was still the occasional channeling, since using the press I haven’t had any channeling issues. Slowly and carefully remove the drop in filter plate and mesh screen, as not to disturb the layer, and start on your next media following the exact same procedure. It should be packed in this order first to last, bottom to top: Celite/DE is your first and bottom layer always so you don’t get clogs. Next layer would be A7 media if you choose to use it. After that would be your Activated Bleaching Earth. Next is your 50/50 PVPP/AC blend. After that Silica Gel, and the final and top layer is your magnesium silicate. I always cover my last layer with a filter paper and ring so that the solution doesn’t disturb the layering when you open your valves. You want a valve at the bottom and the top of your filter stack.

-The Process
Now we’re to the fun part, extracting the material. All BHO and EHO extractions were done at cryogenic temperatures. -60c or lower. HHO(Hexane) extractions were done at ambient temperatures around 70f. You will need two collection bases with at least one jacketed for this process. Your system should be hooked up Material Colums>Jacketed Collection Base>Filter Stack>Collection Base>Recovery System. Blast material normally into your first collection base. If using Butane or Ethanol, run 26-30c thermal transfer fluid through your jacket until the solution reaches the same temperature as the jacket. Once solution is ambient temperature slowly open the valve at the bottom of your collection base and the valve at the top of your filter stack. Leave the bottom valve on the filter stack closed. Wait about ten to fiteen minutes for the solution to slowly evenly and fully permeate all layers of the filter stack. Once all layers have been permeated turn on your recovery system and open the valve to your second collection base, then slowly open the valve at the bottom of the filter stack about half way. you need to choke the flow at the bottom side of the filter stack to help avoid channeling. One thing that is a bit wasteful but gives me great success when using butane is setting the blowoff valve on the first collection base to 20 psi so there isn’t as much back pressure to create channels, but this does waste quite a few pounds of solvent. Using hexane or ethanol just don’t pressurize over 20 psi with your nitrogen. Recover all your solvent and either throw it in the vacuum oven, or go straight to distillation. Using the right ratios of magnesium silicate and silica gel will take winterization completely out of the picture.

EDIT: One thing i forgot to mention is solution concentration! all my experiments were done between 7.5:1 or 10:1 ratios of solvent to solute by volume. I had slightly better yield with 10:1 but this obviously gives longer cycle times. I wouldn’t go below 7.5:1 because of possible losses in yield.

Thats about it guys! Here to answer any questions you may have. Here’s some pics of the goods. 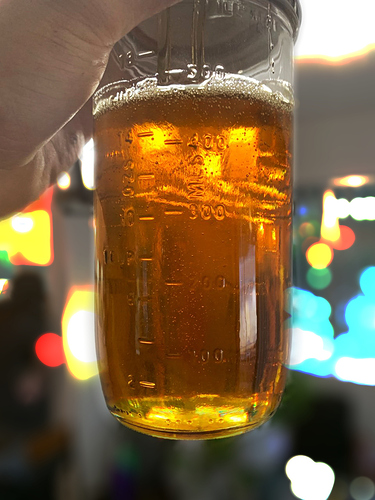 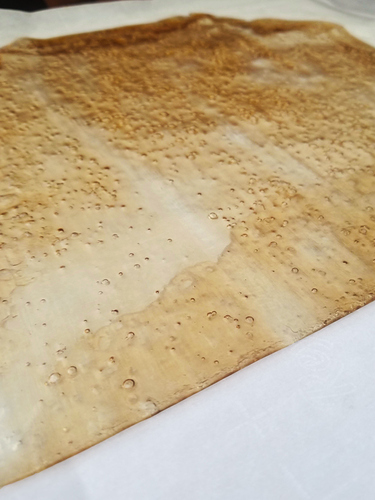 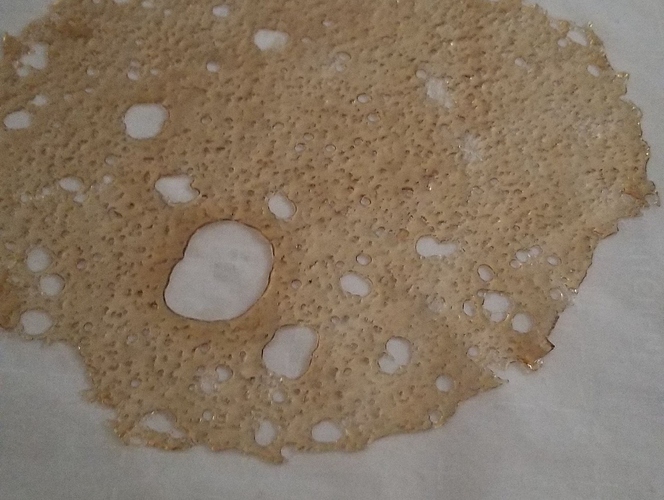 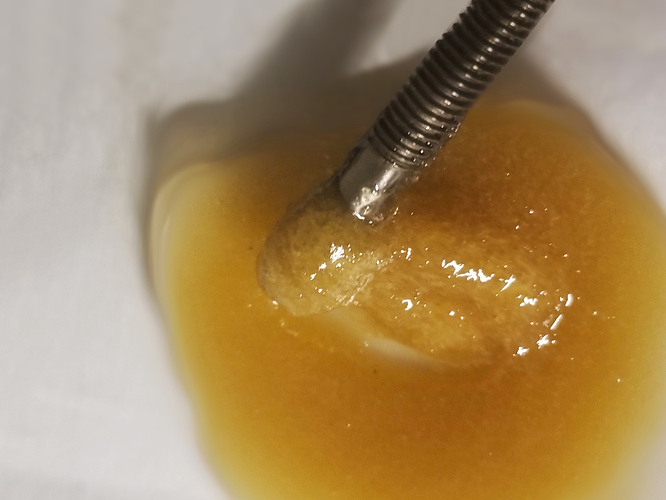 Great write up Thank you

Where have you found a flat cap for packing that fits spools well?

Me and my company produce custom equipment. solvent and material skids, FFEs and Wiped Film Distillers, Laser cut sintered filters, anything stainless really. So of course i had the guys cut me a custom circular flat piece of steel with a nice handle. I’ve found in a pinch the bottom of an erlenmeyer flask fits pretty well. 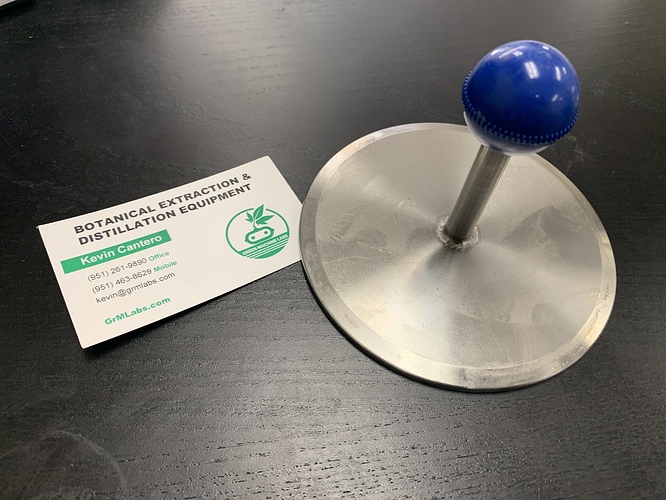 Really good read. Well thought out and easy to follow. Im sure a lot of people will find this useful. Does it remediate all pesticdes ?

This should remediate all water-soluble pesticides.

Hey everyone! was going to edit the post but it won’t let me now. I talked to my buddy who produces the A7 media and it doesn’t contain a lewis acid, that would convert thc to cbd, it has another proprietary acid. The effect is the same, the acid he uses converts cbd to cbn, but it is not a lewis acid. Just wanted to correct myself.

Would you be able to create a custom sized sintered filter plate for me?

You can pack any size filter plate you want! Your column just needs to be tall enough to hold your desired amount of medias. Just remember the smaller the diameter the slower the flow.

I mean can you make custom packers to sell? I made one from wood and sheet metal but its not the best

Curious, anyway you could post a pic of the filter column set up? I am not entirely familiar with some of these parts that I can visualize it in my head to build.

Great write up. Do you use a specific pvpp/ac blend, or do you mix them yourself? Any reason you chose to mix them instead of each having their own defined layer?

I’ll have to get some magsil and pvpp stuff into the mix. I’ve got a 0c etoh extraction. 95% cannabinoids tho. 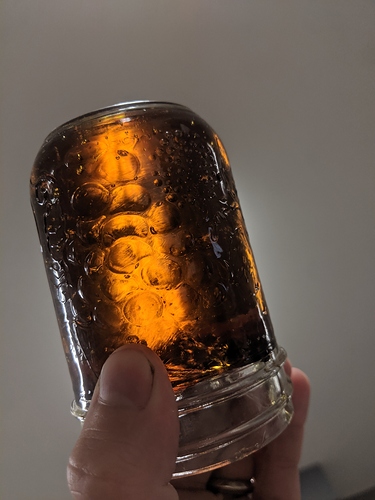 Do you have any knowledge whether or not these things have any benefit of being in a stack? Or if they can just be blended and stirred in a reactor? Is there some kind of chromatography-like hold-ups going on? Or is it just saturating the media with undesirables.

That’s been my question for a long time. I think in a lot of these cases people have been making misleading comparisons to chromatography when really it’s just a simple exposure and adsorption going on. I certainly have had good results with the stir method in alcohol

The stack and order definitely matter. You want the lipids pulled out first or they’ll clog up the other medias. They’re in order of hardest to remove molecules to easiest to remove.

given me some good food for thought! I’ll have to do some experiments to find out

after an LLE wash and a winterizing + degum my crude is pretty low wax/fat to begin with.

What’s your test results on your thc content? Any isomerisation?