VAPI (vaping-associated pulmonary injury), aka vaping-associated lung injury, so far is a real medical mystery. Mostly because it has many possible causes yet no identified commonalities, except for the use of vaping hardware.

Because it is difficult to follow the near daily news updates and research regarding VAPI, I started this super thread to help myself and others understand VAPI. My main goal is to make sure we’re all working with the same facts in an unbiased manner.

I am doing this because I think there are enough very smart people here with the expert knowledge to actually help make progress on understanding and stopping VAPI.

Real people are getting sick and dying. According the CDC, as of 10.3.2019 the count is 1,080 people with confirmed or probable cases of VAPI in the US, with 19 deaths.

Below I will post a link to recent threads on this site dealing directly with VAPI. I am posting new threads only because the understanding of VAPI is changing fast Then, in the next two posts that I am reserving, I will post the most up to date facts on VAPI, and then I will post a list of publicized research/studies as well as news reports on VAPI from reputable sources, which I will endeavor to update every day, or as new info comes out.

If you like this idea please help me! Please add info and scientific understanding if you are able.

Reserved for current facts on VAPI. To be continaully updated.

Reserved for links to peer-reviewed published research, studies, and independent research, as well as news stories from reputable sources. To be continaully updated.

The unexpected identification of the cannabimimetic, 5F-ADB, and dextromethorphan in commercially available cannabidiol e-liquids (2018)

(CDC) Outbreak of Lung Injury Associated with E-Cigarette Use, or Vaping

Beat me to it! Cadmium chemical pneumonitis causing VAPI?

The health significance of gas- and particle-phase terpene oxidation products: a review.
https://www.ncbi.nlm.nih.gov/m/pubmed/24036325/

Formation of strong airway irritants in mixtures of isoprene/ozone and isoprene/ozone/nitrogen dioxide.
https://www.ncbi.nlm.nih.gov/m/pubmed/11673123/

Chemical and biological evaluation of a reaction mixture of R-(+)-limonene/ozone: formation of strong airway irritants.
https://www.ncbi.nlm.nih.gov/m/pubmed/11485219/

Indoor secondary organic aerosols formation from ozonolysis of monoterpene: An example of d-limonene with ammonia and potential impacts on pulmonary inflammations.
https://www.ncbi.nlm.nih.gov/m/pubmed/27842959/

I know this has been touched on… but what about mold/pesticides? Combustion and concentration of those?

Honestly, the number of deaths is insignifigant. The ‘reports’ are too wide-spread. If it were an additive, i would expect to see groups of injury in specific areas. I have to think orchestrated conspiracy casting shade on the whole industry. 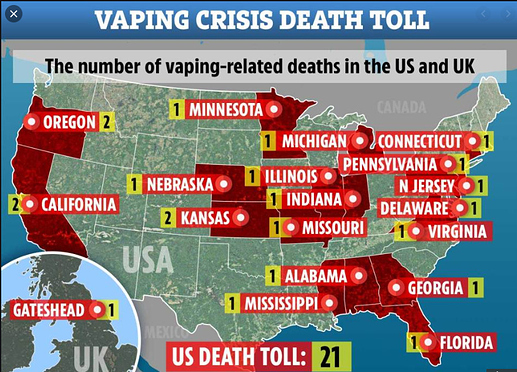 As much as we all want to throw on our tinfoil hats, I don’t necessarily want to assume it’s one big orchestrated agenda. The reason for the sporadic reports could be as simple as some people being more sensitive to exposure to one or more culprits. It could be something as simple as 1 in 1,000 vape cartridges from a shady factory in China is not being cleaned out afterwards for metal dusts and it’s causing this “metal fume fever” that has an identical pathology to VAPI.

One could make the case that the demand for cheap, empty vape cartridges directly correlated with the rise in vitamin E due to how many more cheap cartridges were suddenly getting pumped out. All it takes is a dip in quality control on the production line to keep up with orders. Or perhaps more likely, new shady factories popping up left and right to get in on the cartridge rush and cutting corners on production processes and quality of materials. The latter would be consistent with the cheap soldering theory that has been coming up. Mayo Clinic insisted that this is not a new condition, just a more prevalent one.

If it were happening at an oil producer level and entire batches were tainted, you’d be seeing entire groups of friends getting sick and much more concentrated outbreaks. The only exception to this would be if most people are just not susceptible to such extreme reactions. The more news that comes out consistently just raises more questions than answers

A quick update to post #3. This is a Short Communication in the journal Forensic Science International. Maybe synthetic cannabinoids or other drugs are part of the problem?

When I update the first three posts I’ll note it with a new post.

The unexpected identification of the cannabimimetic, 5F-ADB, and dextromethorphan in commercially available cannabidiol e-liquids (2018)

New “Mayo Clinic Minute” video on vaping research. They are now looking at the aerosol. And a better version of the NBC video of vape hardware and juice manufactures Shenzhen, China.

Dank for the win.

Every Thursday morning, normally at 11am, the CDC, FDA, and state health officials hold a telebriefing about VAPI. This is where reporters get a lot of their info and numbers. As well as just calling the CDC and asking questions.

I normally sit in on the call live so I can hear it in real time. I don’t like relying on reports to transcribe correctly and fully. Also, I like to listen to the reports ask questions, to see if they sound smart or not. Otherwise, the day after the CDC releases the audio and transcripts. Both reporters and members of the public (like researchers) are on the call, but only reporters can ask questions.

To get on the call you can say a name, and say you’re a researcher at a specific university or college. Or, maybe just saying you’re Joe Blow and you want to listen for some reason will work, too? 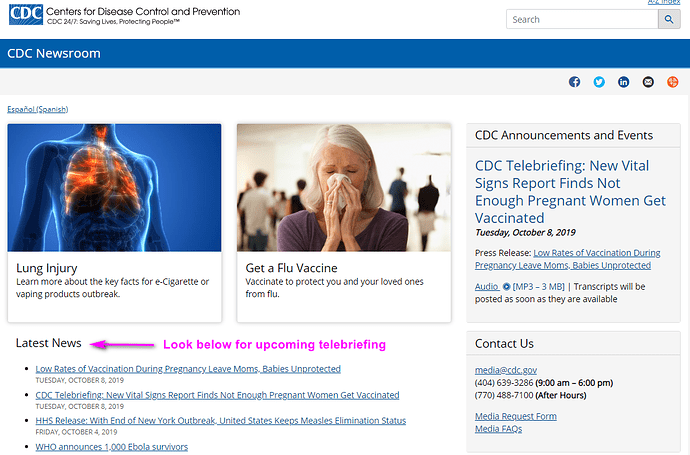 But this week and last week the CDC didn’t release the time of the call until the day of the event. In case the CDC doesn’t publish the time, here is how you call in (11am is the normal time):

2. How to get the transcript and audio of past telebriefings 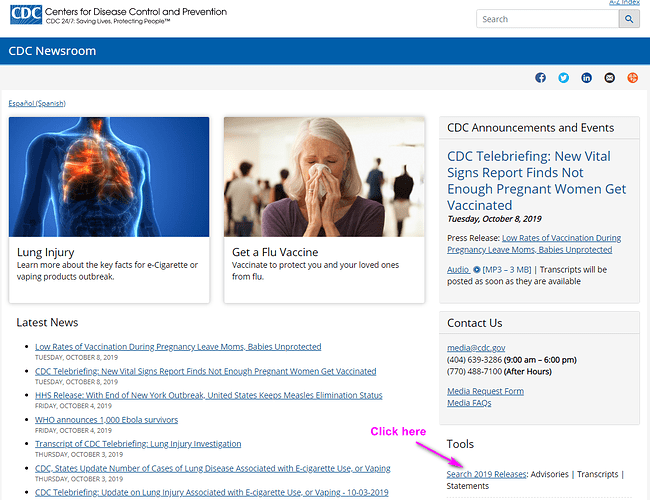 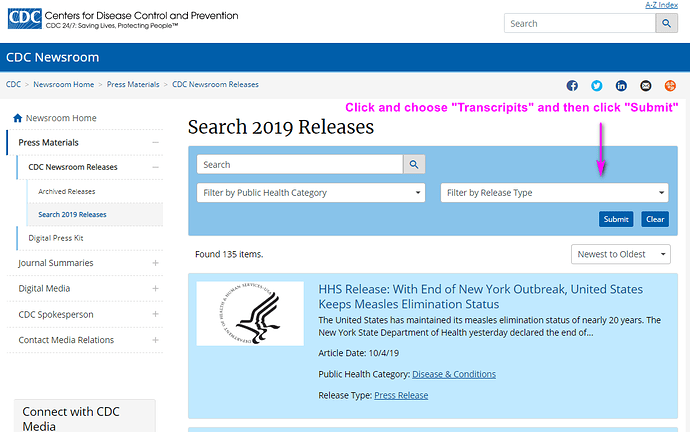 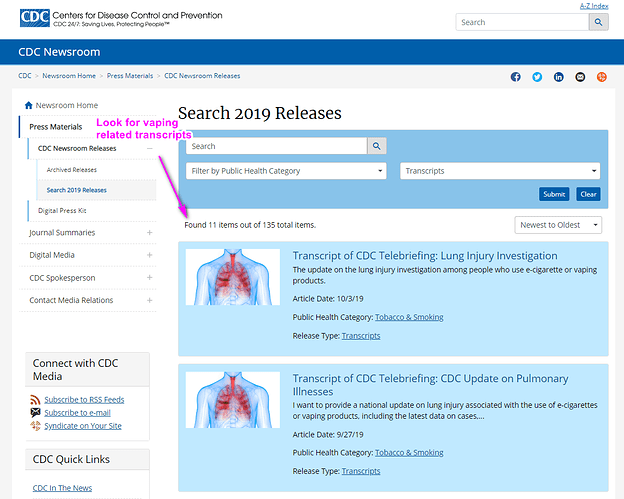 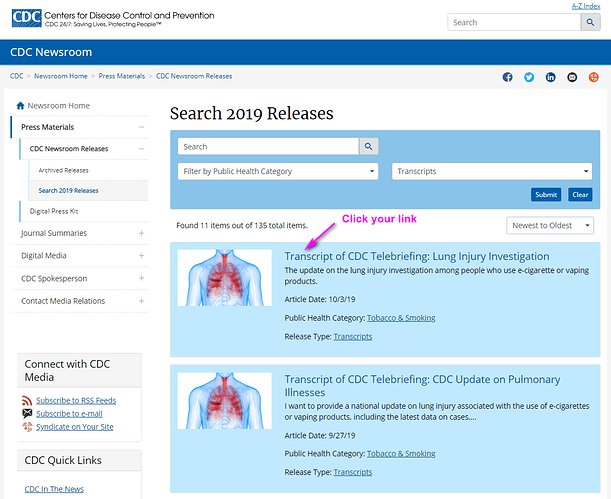 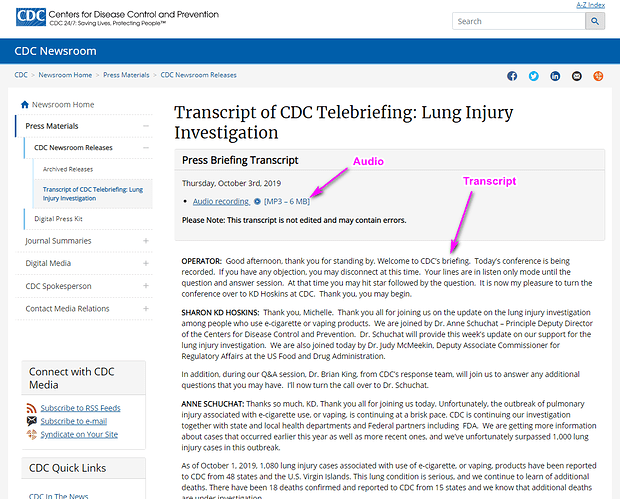 To get on the call you can say a name, and say you’re a researcher at a specific university or college. Or, maybe just saying you’re Joe Blow and you want to listen for some reason will work, too?

Why not say you are a reporter with Future4200, so you can ask questions?

Love it! I was thinking about claiming I’m a reporter from some random paper. They really don’t seem to have much of a firewall for getting on the telebriefing. I will try that, with a burner just in case.

I have quite a few questions to ask.

Anyone have questions they want me to ask? List in this thread or DM me.

If I get any response from other members I’ll post them in this thread so we can all choose the best two questions for me ask.

The oxidized terpene studies are quite interesting.
Some thoughts so far:
-Based on the levels of respiratory impairment seen in the mice, it would seem that the OP’s from ozone and terpenes might not be severe enough to be the sole contributing cause to VAPI.
-Also the levels of ozone they put in the reactant vessel were at least an order of magnitude higher than what would be found in normal atmospheric conditions, although one might argue this mimics the amount of OP’s a battery might produce while heating an air-terpene mixture to a few hundred C (maybe it is, I don’t know). In any case, this potential discrepancy is something to consider.

As it stands with the currently available evidence, it would seem that heavy metals in cheap cartridges/batteries might be a more solid single-factor cause (if there even is one) for VAPI. However, I could totally see a case made for terpene-generated OP’s acting as an exacerbating factor - and that’s not even accounting for cutting agents present in some of these products, reactants from residual pesticides or solvents, etc. Obviously we need more data to come up with any kind of cohesive hypothesis. (I’m barely qualified to even interpret all this, the sciencing has to be left to smarter folks than me.)

One question to ask could be whether they’re testing major vape brands procured from official sources, including assessment of any potential harmful volatiles that may be aerosolized from them. There’s a whole lot of fear-mongering, “don’t-do-this,” “don’t-buy-this,” “danger Will Robinson” going around, but precious little “hey these products seem okay, or at least won’t kill you dead immediately.” We need to know if this is an industry-wide issue that’s somehow only now surfacing (unlikely, but worth asking) or if it’s just a problem with bad actors and shoddy products. If anyone has the means to do this kind of advanced testing it’s the CDC.

At any rate, thank you guys for finding all this information! I know some folks might be getting a little touchy about this whole situation - perhaps for good reason, I won’t judge - but I know I greatly appreciate the dedication to fact-finding and scientific discourse. This is a critically important issue for us to figure out…we do kind of make our living off this stuff, after all.
I’ll be staying tuned.

I just spoke with the CDC media relations, and they are not holding a telebriefing today, and she wasn’t sure about next week either. I had her put me on their media contact list so they will now alert me of the telebriefings and media releases by email.

Among 573 patients with information on substances used in e-cigarette, or vaping, products in the 3 months prior to symptom onset**:

Heating an object to a few hundred degrees will not produce any ozone at all.
Back to our regularly scheduled programming…

The concern is the possibility of terpene exposure to ozone somewhere down the chain of production. I was thinking of maybe posting an informal survey in the forum asking how many of us utilize an ionizing air purifier or ozone generator in our workspaces or labs. That’s one of the biggest contributors to ozone in the indoor environment, but there are others, such as copy machines and printers. Spaces getting ventilation from the outdoor environment will also see higher levels of ozone indoors.

Ozone is only one of several external factors that contribute to these reactions. Exposure to nitrate radicals, hydroxyl radicals, temperature, light, redox reactive metals, and just plain oxygen will also induce reactions with terpenes, which we know for certain induces allergic skin sensitizing responses in susceptible individuals. In the literature i posted, you’ll see how any of these reactions can create a chain of numerous secondary reactions.

The point being the extent of just how unstable these terps are, and how careful we’ve been as producers to prevent such exposures? How many of us are even aware of the remote possibility of these things occurring? Even if this hasn’t yet contributed to the injuries, we should at least be aware of the potential hazards so we can avoid them.