A/B Extraction and Isolation of Psilocybin

I’ve been doing a bunch of research and this seems to be one of the best methods.

An Aqueous-Organic Extraction Method for
the Isolation and Identification of Psilocin
from Hallucinogenic Mushrooms
J. F. Casale
J. Forens. Sci. 30(1), 247-250 (1985)
HTML by Rhodium

Abstract
A simple aqueous extraction method for the isolation and identification of psilocin from Psilocybe Cubensis mushrooms is reported. This method employs a dephosphorylation of the phosphate ester to psilocin, which facilitates a greater product yield and simplifies identification. Psilocin extracted by this method is sufficiently concentrated and free of co-contaminants to allow identification by infrared spectroscopy and gas chromatography/mass spectrometry.

The tryptamines are one of four categories of hallucinogenic indoles in more than 20 classes of indole compounds comprising approximately 600 alkaloids1. Considerable research has been conducted with psilocin and psilocybin since their isolation by Hofmann et. al.2 Several extraction techniques1,3-6 have been used to isolate psilocin and psilocybin from more than two dozen species of mushrooms in four genera (Conocybe. Panaeolus, Psilocybe, Stropharia). The techniques that use methanol co-extract other compounds such as urea, ergosterol, ergosteral peroxide, ??,??-trehalose, baeocystin, and norbaeocystin3,4,7. At present, a useful aqueous extraction procedure has not been reported for psilocin and psilocybin.

Concentration and detectability of psilocin and psilocybin are dependent on several variables, including:

The absence of glucose, which will prevent the production of psilocybin10.
Low levels of ammonium succinate, which will give poor yields of psilocybin10.
The growing medium, which requires a pH of less than 710.
Timing: maximum production of psilocybin occurs on the seventh day after germination, while maximum production of the mycelium is reached by the ninth day10.
Temperature: complete loss of psilocin and psilocybin will occur in harvested mushrooms left at room temperature for an extended period of time3.
Oxidation: psilocin will oxidize to a blue product (possibly accounting for the bluing color in the four genera containing psilocin and psilocybin)9.
Because of the increasing popularity of these mushrooms and kits available from drug oriented publications for growing mushrooms containing psilocin and psilocybin in cow manure a simple aqueous extraction procedure has been developed that extracts reasonably pure psilocin from mature mushrooms. This extraction method greatly simplifies the identification of psilocin from those mushrooms by infrared spectroscopy and gas chromatography/mass spectrometry (GS/MS).

Experimental
A representative sample of 2 to 10g of dried mushrooms is ground to a fine powder by mortar and pestle. The powder is mixed with 100 mL of dilute acetic acid in a 250-mL beaker. The pH is readjusted to pH 4 with glacial acetic acid. After standing 1 h, the beaker is placed in a boiling water bath for 8 to 10 min or until the internal temperature of the acid mixture reaches 70??C. The beaker is removed and cooled to room temperature under running water. The acid mixture is separated from the mushroom powder by suction filtration using glass wool. The filtrate is brought to pH 8 with concentrated ammonium hydroxide and quickly extracted with two 50-mL portions of diethyl ether. Gentle mixing instead of shaking should be used to prevent an emulsion. The ether is dried over sodium sulfate, filtered, and evaporated under nitrogen with no applied heat.

Crude psilocin will appear as a greenish residue. Recrystallization from chloroform/heptane (1:3) yields white crystals. The resulting powder can then be submitted to infrared and mass spectral analyses.

Results and Discussion
This method permits rapid isolation of psilocin from hallucinogenic mushrooms by co-extraction of both psilocin and psilocybin. Dilute acetic acid is an excellent solvent for this purpose, because both compounds are very soluble in acetic acid11 and very little of other interfering substances are extracted, It is most likely some other compounds are co-extracted but are removed from psilocin in the ether extraction from the aqueous base. Psilocybin is completely dephosphorytated to psilocin by heating the acid extract. After addition of the base, extraction into ether should be performed promptly, because of decomposition of psilocin at a greater pH than 712. The extraction and dephosporylation steps produce reasonably pure psilocin from a small amount of mushroom material. Two grams of mushrooms will often be sufficient to obtain an infrared spectrum of psilocin (Fig. 1). Smaller mushrooms exhibits provide ample psilocin for mass spectral analysis (Fig. 2).

This method has been used in our laboratory for six months and has given excellent results in separating psilocin from methanol-soluble compounds. Other identification techniques such as gas chromatography and microcrystalline tests are possible on psilocin extracted by this method.

I’ve read some about methanol based extractions as well.

Anyone have any experience or input?

Yes in theory it should work well. The phosphate group on pyslocibin and the tryptamine group are definitely susceptible to A/B extractions. I’ve read a lot of people crystallizing in ethanol above all else. Extract in hot ethanol and cool for crystallization. But i haven’t done it personally. The psylocibin and psylocin are both not very soluble in ethanol so in theory it makes sense.

Dephosphorylation of Psilocybin in the Intact Mouse

I wonder if adding intact mice would lower the decarb times in my reactor?

One other technique that should work and should be tried is ionic exchange chromatography of psylocibin if you are having trouble getting crystallization from raw mushroom extract. But there are issues there.

I’ve had poor experience with mice. I’ve found fish to be far superior.

Opposed to the maceration of mice livers I assume, which is how they first isolated 11-hydroxy-thc!

shark liver remediation tek!! aint no d9 in there bitch!

Methanol would be interesting. Increased polarity might make for less harsh extraction conditions. Personally I’d approach it by doing a water extraction then raising or lowering the pH with a temp swing to see if you can initiate precipitation. Then recrystallize either by similar technique or in alcohol. But that’s just a humble opinion for what it’s worth. 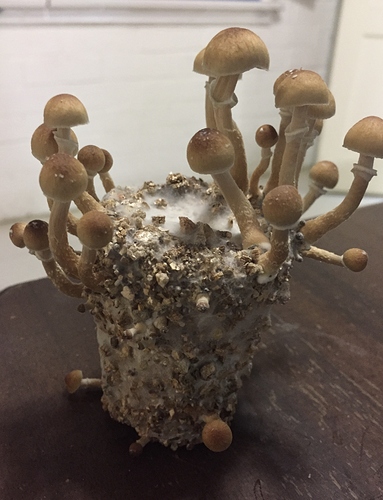 Don’t let the size fool ya, the smaller the stronger. These B+ will lift you off.

There is a very selective solvent for this category of molecule.

Best solvent for any organic sythesis if compatible.

But there is another one in particular.

Is this technique less selective?

I did a 65-70% Ethanol solution because i figured it might kill any bacteria/mold that may have grown? But not sure on the validity of it.

Anyone ever tried smoking/vaping the isolate?

Are you saying in addition to, or in and of itself by itself? I mean they’re several additives to methanol. Barbital, HCL w/tryptamine, if you wanna go that way. Ethyl Acetate? I’m just spitballing now. It’s like playing 20 questions. Okay i give…

I’m after extracts for the development of edibles and tinctures.