SPD vaper getting Through the trap

Anyone out there can help me with this problem I’m not sure my ETOH pro is getting enough isopropyl out of my BHO blasted material… When I’m talking about vapours getting through my trap I guess that’s a huge understatement it’s blowing through two traps and flowing like a river so I don’t know why my condenser is not catching any of it (set at 0c)
I keep my short path at a low temperature of 16 Celsius just to clean up any alcohol there but it’s just going right through my pump and now my pump Has issues, any help would be a greatly appreciated! As a sidenote I must say the smell is very watery with a hint of icy propyl so it’s not just ISO.

What in the sweet fuck?

Why do you have IPA in your BHO?

Set condenser to 0c, open a port on your still (just take off the vac hose), set at 80c, ramp stir bar to about 600rpm, and let run till you see no more dripping from the condenser

Bho through a closed loop

Okay so me being a little dickish aside, we could all use some clarification I think. It sounds like you’re running a CLS with butane(s): n-butane? Isobutane?

Where does this EtOH Pro factor in? When you are talking about multiple traps which this vapor is passing through, what does the system layout look like and what is cooling those traps?

He said short path… I had to double check myself

Edit: Nevermind… should have read yours twice as well…

I need some sleep

Okay yeah I didn’t even read that last half.

@Royboy0330 can you please write out in excruciating detail what your process is? Step by step like you were explaining it to your 8-year old niece. Like, super super granular 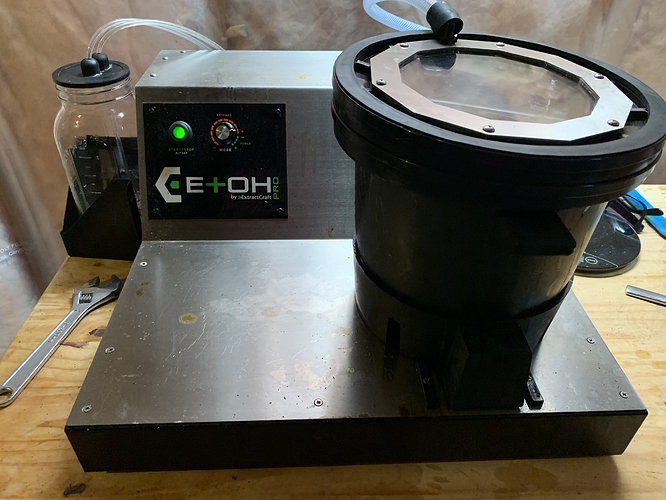 Step two I mix 10 to 1 with ISO 99% filter and winterize over night. Then I run it very painfully through the Ito pro… takes 8 hours! 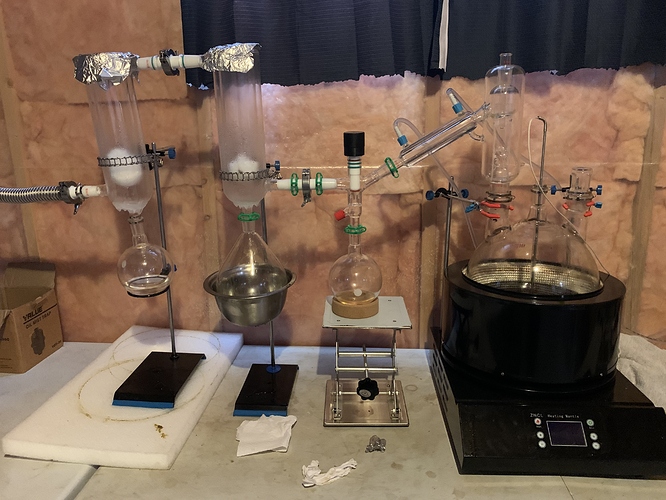 You need to do a devolatizing step. I would just cook the oil in a steel pot on a hot plate up to 120 c while stirring for about 30 min. Get a laser temp gun 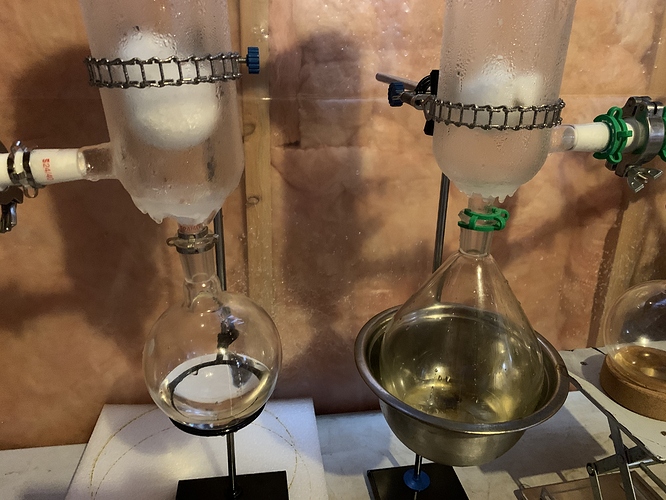 So you can see both cold traps with dry ice Are full of alcohol/liquid. Before this picture I stopped whole process and dumped out a leader of a mixture of what seems to be water and alcohol. I did not add iso to the dry ice that I think was a mistake for sure but still at the rate it was pouring through something is very very wrong. My ETOH Pro is not evaporating all the alcohol out of it it is left locked very liquidy stinking like alcohol.
I do appreciate your help

So here’s the big stuff:

Also, I think I must have missed a filtering step in your process because if you don’t filter the fats out, you’re just adding alcohol and then removing it without any affect on the oil

That being said, the goal of that short path setup you have is to distill cannabinoids which boil around 400C, not the alcohols that boil around 60c (not under vacuum of course). If you pull too much vacuum while distilling the volatile compounds (the devol step @Apothecary36 was talking about), you will reduce the boiling point of those alcohols below the temperature of your traps.

Lastly, you definitely want something liquid in your traps. The vapor in the still only sees the inside of the glass; if theres nothing transferring the heat from your dry ice to the glass, the vapor in the system won’t be contacting a surface cold enough to condense them

I was definitely using the ISO for filtering that’s all we can get Easily in Canada, I have now found a source for ethanol so that will fix a lot. the vacuum does seem to be pulling extremely hard maybe a vacuum regulator will fix that.

Per Sid’s recommendation, see: Iso vs ethonal for why it matters

Personally I’d throw the e.toe pro in the trash and get a rotovap. Mainly because their pronunciation of EtOH offends me

Edit: get your self a controllable leak: Roto Evaporator issues

See: I just got a 2L rotovap, will this vacuum pump work with it ? for boiling point of ethanol at various vac levels (iso should be close).

It’s wild, weeds legal in Canada, and there tek just seems so fucking far behind…

Everyone there’s makes it sounds like getting consumables is impossible…