Anyone have results?
Briefly had someone mention to me just now they’re doing that. (Locally, lol not a secret tech)

Guess I could just find out…

There’s also the legend that you can bubblehash them lol

@Sidco_Cat what was the lab that’ll test in Oregon?
(Damn I mentioned you on two websites today)
I’ve got some test runs for me underway from family up there and will have available to send soon.

I was tempted to say something silly, but I mean, I’m pretty sure most oils used in my food or cooking are expeller pressed, which sounds like a fancy industrial way of saying it’s rosin pressed canola oil (maybe at a cooler temperature)

Personally… you’re talking psilo, right? I’d want to avoid introducing heat, since I have this idea psilocybin and psilocin are kinda fragile.

If it works, it sounds like the output might be fantastic for making edibles, unrefined as a crude extract. I genuinely never considered rosin pressing some dried shrooms though. Your gf’s hair straighener would be too hot and too weak to press some dry shrooms for sure. I’d go hiiiigh pressure, low temp, and see whether whatever was expressed was active at all.

I have someone trying cold presses first. Tbh that was their first rebuttal. I’m diving in tho

Mushrooms + mortar and pestal + vitamin c tea water = the one and only time I’ve tripped em. So I’m not experienced due to my only experience lol

There’s not a great enough quantity of what you want inside of mushrooms to just be able to squish them all out.

Squishing rosin is only effective because cannabis makes a lot of resin.

Also I think the actives are contained within the cells so the actives are much better distributed among the biomass than cannabis which makes all its resin in its trichomes and not all the plant cells.

Had someone in passing mention that’s how they’re getting shooms now. From a press. (Consumer who mentioned it was heated plates (650f maybe - sounds super rough for temp)

That’s the only hint I’ve got for yall. Peaked my interest enough to ask.

I’m willing to pay and find out…
so I’m finding out hopefully soon.

Why not try it with your hair straightener clamp?

Better jump on it. I’m gonna stand by the point drawn by someone else… they’re a lot less actives in our dried shrooms than our dried cannabis, which is definitely on the resinous side.

That said… add a few tons of pressure, and who knows?

Lmfao, long story short. I’ve not pursued owed $/equity in writing due to the fact the business is dead / shut down after I blew it up.

My OG move weight engraved v1 is in Ohio at my friends house and he uses it frequently.

Have a longs peak, triminator dual stack, and low temp press available tho so I’m not unable. May very well try soon. Just a spur of the moment conversation.

Let me know if you find a Canna Clamp sold from Midwest Concentrates, any from a different company can’t correlate from manufacturer sale(original purchase date). I’ll gladly add it to my tally.

I’m betting you’ll have semi promising results, and until you do, up the pressure you’re working with… I feel like it may be a simpler method on an industrial scale

I also feel like those hints and rumors have a place. Someone’s probably squishing SOMETHING out, and it’s worth trying if you can source a press or too (and a stronger press if the first isn’t the right caliber of high pressure)

They didn’t come from thin air 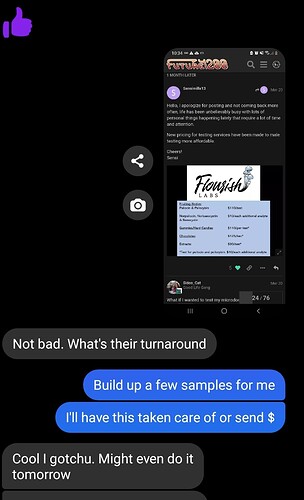 Hello all, I am new here, just signed up but I am excited to explore the site. Also, if there is anything improper about me sharing my friends new business below, let me know and I will remove this. I am not here to ruffle any feathers but to help get the word out for him. I want to announce the opening of a psilocybin testing lab in Portland, Oregon. Flourish Labs is open and accepting samples for quantitative analysis of fruiting bodies by HPLC/UV. They are workimg on the method for chocola…

BTW, when I Google Flourish Labs Oregon, a link to this thread comes up before the website.

Ain’t that something ^^ seo is a helluva thing here

Sensi is legit. Known dude for ever he’ll take care of you.

I’ve worked with flourish for a few months, have nothing but good things to say