Has anyone heard about this!!!

Plant Growth Regulators (PGRs) in Weed: What You NEED to Know!

What are plant growth regulators and why do you need to know about them? Here is the shocking truth.

Paclobutrazol is horrible shit that was introduced to Apple farmers In 1984 and was banned the following year.

I had a partner who was adamant we use it because he used to use it with “success”. So we used it, the weed wasn’t nearly as strong and the extraction following was horrid. The yield was cut in half…

I spoke to my parter, did more research and realized this was some fucked up shit that I’d never use again.

When you introduce pgr’s it shuts down the Gibberellin Pathway and starts growing more plant mass.

The plant hormone gibberellin (GA) controls major aspects of plant growth such as germination, elongation growth, flower development, and flowering time. In recent years, a number of studies have revealed less apparent roles for GA in a surprisingly...

I still see paclo packs coming from the hood and the East side of the state occasionally.

This article is incredibly misleading how they have lumped natural biostimulants in with PGR’s made by Dow/Bayer/Monsanto. Is there anything wrong with clean organic minerals, kelp, castings or rice hulls? Is that really the same as industrial agrochemicals that give people cancer?

Most states banned them but their are plenty of natural pgr’s that you can use.

I still have a 1 gal bottle of hammerhead collecting dust.

Shit works great at adding weight, but at the sacrifice of trichomes.

As with anything else dosage is key. Most people use waaay too much. It’s not a nutrient. If you are against paclo then I really like seacrop 16. But a small dose of paclo at week 2 given one time will give good results and not effect terpine or resin production.

I think I read an article that showed a side by side of buds grown with and without these hormones. The buds with hormones were swollen and round. The without just looked like normal weed.

Doesn’t that decrease potency? There’s never a free lunch, something has to give. With food crops, the more you have on one plant, the more watered down the flavor. It would seem that way with thc levels, but maybe it is not significant, idk.

Decreases potency and taste. The only thing worse then pgr buds are the hemp packs covered in distillate the kids have been throwing farther then uncle rico

I have bottles of hammerhead for sale if you wanna try it out. 2ml per gallon for 2 consecutive waterings between weeks 1.5 and 3 from flip.

What was the one from humboldt county’s own nutrients, was it bushmaster everyone used back in the day most fried there shit the rest just regretted it. Then they had snowstorm or something like it, between that and when gavitas came out and they didn’t have the ceiling height i saw alot of fried cookie runs that yr.

Yup, bushmaster was the one. The other one was phosphoload. Its super easy to tell pgr bud from non.

What’s a small dose to you? I used it at 1 ml a gallon on a flood and drain table. My yields were great, but the flower was shit and so was the extract. Yield and quality, both shit

1 ml per gallon seems about right. You only applied it once? Or multiple applications? Most people feed it from week 2 through week 6 that will fuck up your bud for sure. I only use it in soiless mix and usually for gh and od so I’m not sure if hydro is different. Never tried it in hydro.

All the buds in every dispensary in massachusetts is pgr and its fucked up. I never knew about them till my girl told me about them and I was like, what the fuck that’s why!!! And there’s an apparent and noticeable difference in the ash and residue it leaves in a bowl. Non pgr ash is ahh white and can be blown away like actual ash, but pgr grown weed the ash is all chaecoally and clumped, also not really gone just black ash.

I used it for a single feeding at day 14 of flower. It’s awful stuff 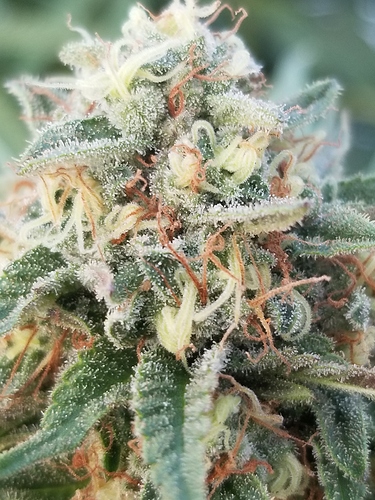 Some awful bud I guess

Lmao, are you taking the stance that pgr’s aren’t bad? You’re flower looks great. The stuff i used called phosphoload is nasty shit, thus me calling it awful stuff… Is Phosphoload a Cancer-Causing Chemicals Used to Increase Buds?

I had decent looking flowers, that tasted ok and smelled good, but it wasn’t great flower. As a farmer I’m not about cheating in my garden to get ahead.

One trick to tell if your grower uses a pgr, break open a bud up. If it looks Dark tan/beige inside, a pgr was used.