Who here has raised pigs?

Getting set up for it now (well not just yet, starting this weekend). Getting 1 boar and 2 gilts for our breeders. We decided to do red wattles, going with registered ones just so I can have that as a selling point for my piglets (even though I understand it is totally irrelevant for people buying feeders). We almost went with Idaho pasture pigs, they are super popular in this area, but they seem to have a little bit to much variation in finishing times due to the kunekune that’s in their blood. I don’t want to deal with wintering feeder pigs. Since my whole part of using the pasture and feeding our alfalfa is to cut down on feed costs, it just seems counterproductive. Doing 2x 1/8acre pens for the female breeders, one for the boar. The feeder pigs we keep each year will be pastured all spring/summer and harvested mid fall. Next spring we will just buy a couple mixed breed feeders for this first summer, since ours won’t be ready to breed this fall. From what I read it usually takes between 600-700lbs of feed to get the pig to butcher, this is without pasture or any supplemental input. I plan to supplement the normal swine feed with our alfalfa, all of our extra milk, garden vegetables and obviously the food that’s in the pastures they will be rotated in. I’m really hoping to be able to cut the amount of actual swine feed down close to 20% (that’s what people claim is doable, time will tell), which would make raising them super affordable.

Just starting this thread to get peoples “tricks of trade” you could say, since this is new for me. Read and watched a ton of videos and am feeling comfy, but still love to hear it directly from the source if possible (and I don’t know anyone irl who is really into pigs). Only part so far I’m not too hyped on is the castration part, banding goats is so easy, was shocked when I saw the process for pigs lol

I’d rather drop off my deformed and damaged vegetables down the street and pick up a pig to butcher every now and then. Pigs are well, pigs.

We LOVED raising two Kune Kune pigs this last year. They just went to freezer camp in May and are delicious!! 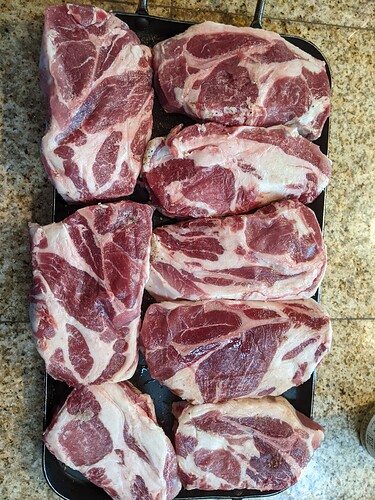 Kune kunes sound super cool, just the longer grow time that turned me away from them for this project. If I was somewhere I could graze them all winter I woudnt be concerned with the longer grow time. I actually plan to do them still one day and leave them with my goats (read they co-inhabit pastures well. Also want them because from what I have read they produce a bunch of lard as well, which the red wattles don’t (from my reading, if I’m wrong, pig people please correct me)

That all sounds right to me. We bought feed and supplemented with everything else. I stay in close touch with the local food bank for discards too.

I stay in close touch with her local food bank for discards too.

ok here is a tip.
make a step to the feed trough.
reason is will be bigger shoulders
at butchering time. raised many a pig.

Simple and makes so much sense

Cut a deal with the local butcher yesterday. Gotta go pick out a pig today. Should be about 300 lbs of pork for about $300. I’m not sure I could beat that price raising it myself since I’d still need to pay to process it.

That’s a steal! Hope it tastes good. Bought a pig one time for dirt cheap that had missed it’s butcher date and it was sooooo fatty lol

Turned out to be good dog food, so I wasn’t mad.

I’ve tried their pork chops and I’m about to try the breakfast sausage. Apparently the farmer will let us choose the pig we want, so I’m counting on the butcher to pick a winner. Don’t forget to get your jawl bacon!

My cousin has red wattles.

Are you going to slaughter them on the farm, or take them somewhere? Loading a pig on a trailer is a task a lot of newer farmers don’t prepare for very well.

I’d recommend not being around for the killing process of you’re gonna outsource lol. My neighbor raises and slaughters chickens by the dozen but the pigs still haunt him. Says they were very… Aware.

I’m going to slaughter and process them myself. Only time they will go to the butcher is if I’m selling one to someone.

He just got them not too long ago, but so far so good. He says they are the ideal pig to raise for rate of gain/growth rate.

ideal pig to raise for rate of gain/growth rate.

This is why I want to go with them, I read usually finishing close to 7 months

Yeah they smell blood and get crazy and start screaming. The one i use to live by would mist them with water and cattle prod them and the pneumatic to the back of the head. The hazy that went on there to someone my friends would haunt me too. You could hear them scream sometimes

Unfortunately my son did choose to become a cop.