How to spot a broker

I just figured it’d be fun to put up a quick post about brokers in this industry. If someone says any of the follow things to you I would immediately stop talking to them because they are 100% wasting your time and theirs.

If someone says they have full spectrum isolate…walk away

Wouldn’t that be an oxymoron

Yes, that is the point babe hahaha 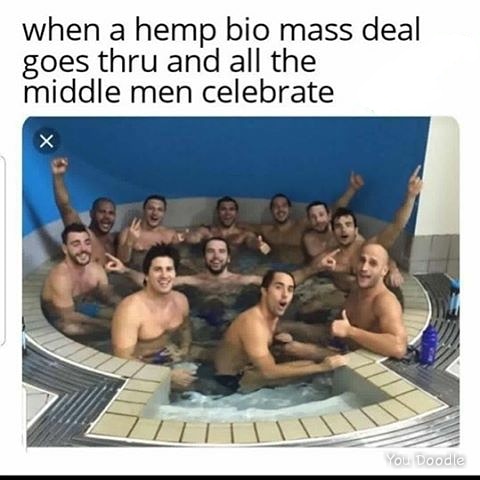 So basically 99% of the industry are brokers, in a nutshell…LOL

No, I wouldn’t say 99% is accurate. It’s more like 99.5% of guys in the CBD/Hemp/disty game are brokers. I always like to disect words so let’s take the term “broker”. “Broke”, someone without funds/capital. " er", usually placed at the en of a word to imply “more”(higher, lower,faster). All you need in the equation is a buyer + seller = transaction or sale. I’m still trying to figure out what I need a " broker" for…

Steel, I agree with all of your points except for product not available for less than 4500. We can do that and I have no problem proving it.

I actually disagree on a few of these points here.

So a farm rep would be a “broker”? Farmers farm. They use farm reps as a vehicle to move their product because typically, they are not very business savvy. And I’d love to see anyone roll up on a farm and ask them to buy their hemp. That’s how you get shot.

I agree on the 1000kg ready for purchase. We all get those tests and emails. I think I’ve seen that same one 10 times this week from 10 different brokers. It’s from Holland. Have you seen that one too? Labs typically don’t sit on product. Their not wholesalers. That’s not their business model. It’s mostly “made to order” and unless a buyer falls out, they could possibly have 1000kg that they need to move. But will have a home for it in most cases. But that could and does happen.

I agree with Organictherapudics on this one. I’ve seen isolate below $4500 a liter. It’s out there.

I disagree on the proof of life. Small farms in OR like to send these. Maybe because there’s so much distrust in this industry caused by “brokers” that screwed someone over. But what’s wrong with them? Why would you dislike a proof of life video?

I disagree on the escrow part. Escrow has been a very valuable tool to insure everyone is paid. It’s used in many industries. If you as a seller trust a picture of a bank account or a mutual fund, then go for it. If you were a farm or a co-op or a hedge fund that secured product on a futures deal in October, how would you like to get paid? Are you driving around with a couple million dollars in cash in your car?
Now if they say “double blind” escrow. Yes. Walk away. That’s broker chain in the hiding. However, I just spoke with a group of X-wall street guys that are structuring a “double blind” escrow company. They have been in this industry for over 4 years and have seen it all. Some layer of privacy for both parties is not a bad thing if there’s not 15 people on the “down-line” like a pyramid scheme or something. And on a large purchase of a couple million dollars or a structured roll out over a period of time. Escrow is a great way to insure the seller is paid on the structure without having to wait for the buyer to get their funds together. The money is secure and is paid out on the contract. Where’s the bad part in that?

I disagree on the secured facility that no one can visit. We own one. And it’s where product is stored when we purchase small lots from around the country to make one large lot that is then transferred to a distribution facility. There could be over $500M of product in there at any given time. (Not this time of year, that facility is empty. It’s mid May). And NO! We wouldn’t let anyone near that place. It’s heavily guarded and in the middle of nowhere. I also know of some other large buying groups that have similar facilities like ours in OR and one in CA… They are also in KY and CO. There’s massive one being re-built in SW Kansas right now. It’s 177,000 sqft. It used to be a cold storage facility for meat. My uncle runs security for a HUGE one in OR that I have seen myself as well… So they do exist. You probably just haven’t been invited to one yet. And you probably never will. Don’t let it hurt your feelings though. That’s just how large buying groups quarantine product until the market spikes and they are ready to sell it. They will become more prevalent in this industry as well as there are 996 hemp growing licensed issue just in OR in 2019. You can’t keep in a barn. (Well. Some do. But have you seen those lots? They are pretty ugly).

That being said. Yes. Brokers are a pain in the ass to deal with most of the time… They all want $0.10 on the deal and they have “partners” that need $0.10 on the deal too. When they are mostly just some dude (or gal) sitting on their moms couch in their underwear forwarding emails and don’t actually work for a living.

We work for a living. And yes. I do broker some deals when we sell out of the product we did futures deals on last October… I’m not ashamed of it because I hold value. We are transparent when it’s a brokered deal because honesty will always prevail over a bunch of lies that all come out in the wash…

If they are a valued broker, they should earn a commission or at least a finders fee. And if you have seen the market, the “broke - brokers” are getting weeded out quickly because they aren’t making any money. And their mom won’t let them live in the basement forever.

At the end of the day… If your not running a lab or driving a tractor, you’re a broker. But being 10 steps from a buyer or seller. That’s gotta stop. And it is. Because they aren’t closing deals so they go back to work at the fast food joint they came from.

If brokers were just honest with people, they wouldn’t get such a bad rap… Why don’t loan brokers have the same bad rap? They’re just passing paper too and taking commission for it.

I’m looking forward to the replies on this one…

The reason real-estate or brokers in the banking sector don’t get a bad rap is because you deal with one for a transaction. The problem lies in what you said about the chain of 15 brokers trying to make 10 points each on a transaction.

If I’m buying anything bulk I ask for escrow until labs come back… how do I know your coa is for this material?

Huh, so the broker goes and argues that these things that define a broker are in fact not what define a broker, yet many of them apply to themselves. Ok! I mean, kind of proving the point of the OP. But my opinion is it’s a certain type of broker that gives all brokers a bad name. Still funny that you try to argue against the points whole simultaneously proving many of them. Well done highline

I agree with 95% of what you said. We ask for bank letter on large purchases so we dont waste our time.

and we sell isolate for less than 4500 on larger orders.

The rest i agree with.

If someone wont give any information about the buyer … walk away.

If there is a better way to get in touch with growers I would like to find out about it! I just keep getting bombarded by brokers…

Go to any farming event and meet them face to face. Or go to a hemp conference.

do you need biomass?

Are you a CBD lab? Or hemp grower? I’m not disbelieving your price, but unless you produced the isolate or distillate you are a broker. So you disputing the point about selling product for less than $4,500 is kind of funny. No one said isolate isn’t found for less than that, only that such prices were signs of a broker