Recently got some very disappointing lab results that I don’t know what to make of.

2 months ago I distilled some cryo (-80) ethanol extracted trim and got these results upon testing (75% d9 thc, 81% total cannabinoids):

The color was not great and got progressively worse. Eventually ending up a dark red with lots of streaks (side question - anyone know what the streaking is caused by?) This oil was stored improperly - in the fridge without vac seal or inert atmosphere.

About a month later (one month ago) I did a test 2nd pass on this material and got a nice yellow product with these test results (81% d9 THC, 92% total cannabinoids):

Anyone know where the CBDa came from? Don’t understand that. Shouldn’t any CBDa be decarbed under SPD conditions? And where did the THCv come from? The 1st pass material was 0.07%. And the CBC? 0% in 1st pass, 2.64% in 2nd? Conversion?

Pretty happy with how that went. Well a couple weeks ago, I distilled the remainder of the orginail 1st pass material and got some very nicely colored oil - pale yellow. Here it is: 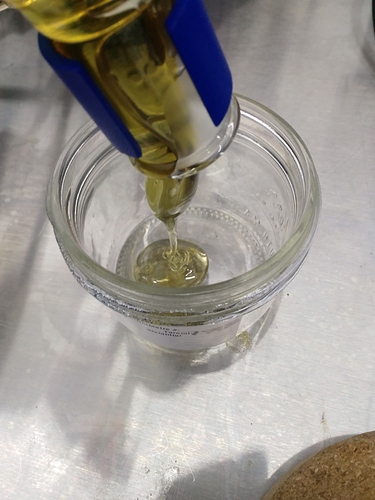 Well, the testing results were disappointing to say the least and make no sense to me. Here they are:

Is this possible? I don’t see how aside from an error on the labs end. How can you go from 74% THC on 1st pass to 68% on 2nd pass? Both 2nd pass distillates were collected within a narrow vapor temp range ~164C and 100 or sub 100 microns. Even accounting for the reduced potency from adding 5% by weight terps, this doesn’t add up to me.

Has anyone experienced anything like this? The ratio of the minor cannabinoids is also confusing as they seem inconsistent b/w the different tests. Could the added terps or the terps in tec temper be throwing something off? This last test, the low one, came back at 2% terps which is reasonable given that some probably boiled off and that the lab doesn’t test for the terps in tec temper (at least they’re not included in report). Also very unlikely I added more terps than I wanted (probably added less).

I don’t know what to do. My plan is to next send the lab 1 sample of distillate from new batch and a sample of the same distillate mixed with terps + tec temper to see what that looks like.

I’m a bit confused, you cut your product, and you’re unsure of why your cannabinoid ratios went down?

For the sake of redundancy I hope it’s just early for me and I’m not understanding you properly.

The amount by which it was cut is not reflected by the potency results. 5% by weight of cut should not result in more than a 5% drop in potency compared to 1st pass. Right? Even when accounting for the cut, the potency is still lower than the material I distilled.

Have you accounted for analytical variance? Most places have a +/- 15% variance. I’ve sent in 5 samples of the same homogeneous distillate to QC my analytical facility before, ended up with a 7% variance.

Especially if you have any isomers present, it seems the results can get skewed a bit between tests, even when tested in sequence.

Do you think chalking these results up to variance is reasonable? I understand that there is always variance inherent in the testing process, but 15% seems quite unreasonable. How do you accommodate that? Is it just “oh well, lab fucked up guess I’m stuck with it?” Or do you send multiple samples and average the results? Seems expensive.

Even with variance, these results don’t make any sense to me. How does one get a lower potency on 2nd pass material than on first, when the 2nd pass was collected sub 100 micron and ~165C vapor temp?

Also, any thoughts on where the CBDa and THCv came from in the 2nd report (compared to the first)?

Honestly my thoughts are that your lab may not be cleaning the machines properly between runs. I’ve had a CO2 extract pop for residual butane, demanded a retest, all was fine on the retest. It’s also possible you goofed the second pass a bit, did not homogenize, or something along those lines. Hard to say without QC…

Or as @cyclopath would say, get some in house analytic equipment to compare.

I sent an email to the lab to get a conversation going, maybe they’ll agree to retest. I doubt I goofed the 2nd pass based on the parameters under which the fraction was collected (~90 micron and ~165C vapor temp). Wouldn’t those parameters indicate that the 2nd pass was normal? What do you mean by didn’t homogenize? Homogenize the distillate with terps? I considered that, but ruled it out as I stirred hard (vortex) at around 50-60C for 1 hour. Is this a normal homogenization process? I plan to get a high shear homogenizer eventually, but in the mean time is this method solid?

Would love some instrumentation, but got to make some money first lol.

It’s definitely possible that you caused isomerization, especially re distilling older material that was improperly stored. Not knowing the exact contents of diluent could involve some miscibility issues, which would create issues of homogeneity.

The CBDa makes no sense. The CBC does.

Do they list the instrument (instrument format) used on the COA?

I know they use HPLC, not sure with what kind of detector tho.

Knowing the detector would help with the precision/accuracy of the testing. If they are accredited then hopefully the cleaning SOP is solid, but you never know.

I will find out. I assume they use UV-Vis or PDA.

The SOP is probably great, but, people make mistakes.

Yip, totally agree. A retest is always great as it can speak to human error or instrument accuracy/precision.

Appreciate the response and the info regarding where some cannabinoids elute. But, the low potency result has only 0.5% THCv and 0% CBC, so I don’t think conversion (into those compounds at least) can be said to be the cause of the low potency. The issues with the minor cannabinoids are related to reports 1 and 2 (order of images). The 3rd report (last image) is the main issue and has the lower potency.

Did you mean that the low potency may be due to conversion generally? Because I don’t see any discrepancies with minor cannabinoids between that result and the results of the material from which it was distilled. Unless it’s conversion into compounds not listed in the report. Will request chromatograms and see if there are any mystery peaks not attributed.

my bad, I misread OP

Sorry for the confusing OP. The final pass distillate with the low potency (the distillate in question) has no CBC, but neither does the distillate from which it was distilled (1st pic). How could it lose CBC if there wasn’t any to begin with? Sorry, don’t mean to be rude. Please don’t take it that way, I really appreciate your help!

The minor cannabinoid thing is more of a curiosity. My main problem is how did I go from 81.5% total cannabinoids in first pass material which was re distilled to give 72.8% total cannabiods in 2nd pass? Even when accounting for 5% added terps, this doesn’t add up to me.

Also any thoughts on the presence of CBDa in report 2 (2nd pic) compared to report 1 (1st pic)? Report 2 is the product of redistilling report 1.

re read the post, my bad! My best guess is you’re dealing with a homogeneity issue.

We’ve seen around a 10% swing in potency during short path mains. If you tested a high purity portion the first time you may have revealed the degradation when you homogenized with terps.