"Fog" appearing on inside of SPD collection flask?

Mid way thru collecting main body on a distillation of crude that was extracted with -80C ethanol, I noticed a fogginess on the walls of my collection flask.

Using a 3 way cow with heads in another bulb attached to system. Wondering what the fogginess is caused by and why it’s only appearing on the walls of the flask which I’m currently collecting in. Other 2 are clear. Hitting the outside with heat gun clears the fog, but only temporarily it seems. Can’t imagine this is a good thing and I’m sure it’s gonna have negative effects on the odor at least. Any one have any experience with this? Thoughts? Remedies? Etc.? Thank you! 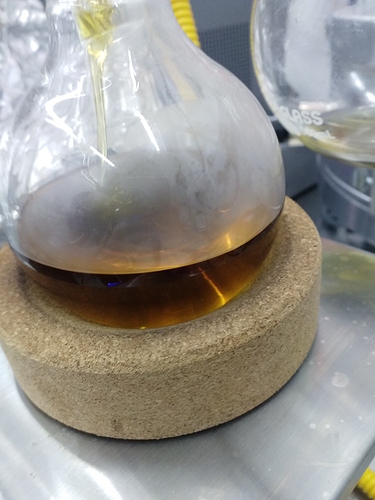 Other side that has been hit with heat gun for a few seconds: 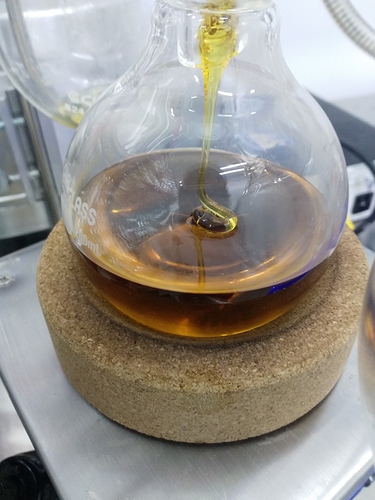 I notice the same dilemma when operating our 2" pope WFE collection flask. I assumed it was terpenes condensing due to the flask being “chilled” from the ambient air temperature of our lab, and not being fully stripped in the first place. Its around 65ish degrees usually in our lab.

Would explain why a heat gun helps remedy the situation temporarily. Ive always thought about getting heat tape to wrap around it

I always thought it would be better to not have a flask containing heads attached to the system while collecting mains just in case. A vacuum take off adapter would remedy this correct?

I get this too, happens more when using a hot condenser I found though. Pretty sure it’s caused by not fully clearing lighter fractions completely. I think this is what @goldleaf_scientific new pistol collector helps prevent.

I would assume the terpenes are boiling off the flask, travelling down into that flask as a vapor bc the condenser isnt cold enough to condense them so they probably sit in your flask as a vapor until it slowly condenses. I imagine they condense once vac is broken as well at the end of the run. But I’d agree, the runs where I noticed build up of condensed vapors on the walls of my recovery flask, they definitely had an odor to them.

Most likely didnt get all the heads? Cant be too sure personally, I operate WFE mostly only have a Short Path from david for fucking around.

According to what @Photon_noir has told me when I fist encountered a similar issue, the vapor cloud is typically caused by partial vacuum of vapor that gets cooled. Cold glassware, small leaks, and clogged lines can all cause this phenomena. It is usually seen when the CFM is not high enough to fully evacuate the bulb as fast as the vapor came in, so it formed a high pressure region that allows for the condensation of vapor into a mist to occur.

Check your vac lines often, and be sure to clean your lines regularly. If you can see the vapor, it is mucking up your gear further down the line. It may not be a bad idea to leak test your system as well. I only had it happen to me once, and I blame it on a small leak between the condenser and cow on that particular run.

And @tetramethylsilane @Ion, one can never fully purge the heads fraction. No matter how long your run your heads fraction, there will always still be heads in your tails. I’m not entirely sure why they cannot be fully removed, but my mentors and personal experience have shown it to be true. I use two separate cows in my process and break vacuum to switch them out when I am confident enough heads have been removed. Leaving the heads fraction in your system (especially in front of or parallel to your mains) will pollute the mains with the wonderful smells of non-volitile terps. There are methods for purging them, but I find it easier to not bring them into the mains in the first place.

In my experience it is your heads flash still being attached to the cow, under vacuum the terps are lightly boiling off and the venturi effect is pulling them into the receiving flask along with your distillate. Switch to a quick change style receiving adapter and the problem should eliminate itself.

Heads cannot be 100 percent removed due to mixed boiling points, once the concentration gets below a certain point it will take much more heat energy for the heads to boil off due to being in a solution of many other components.

I run a full bore setup without a cow and still have this issue with my waste fractions flask sitting in dry ice, and people are saying it happens with a wiped film. I think you’re right that you can’t 100% clear heads though. I think the solution is to heat your receiving flask so the residual terps can’t condense. I believe @Soxhlet uses a heat lamp for this?

That’s something I’ve noticed with regular swing arm adapters. The empty flask will tend to get foggy. You can close a valve on the pistol receiver and prevent the flask from being possibly contaminated. I’m not sure what it is exactly but it does make sense to be heads as you would expect a fair portion to be vapor when running a hot condenser

What you were told is untrue.

Yes you can remove the heads entirely. You just need to push out the mains 1% in at a higher temp. Then back off and they are gone.

The lamp works a treat, get a heat lamp bulb and screw it into a desk lamp. Get yourself a dimmer switch to control the heat from the lamp. Another helpful hint is to make a heat shield from tinfoil to keep the gl connections from getting too hot.

Fog is vac leak, right? I get every time lol.

Thanks @Soxhlet ! With the dimmer, is there a temp you try to keep the glass at? If you have a large receiving flask, like 5L for example, would you use two lamps?

some not so solid information in this thread thus far. if you have fog in your flask (vapor) you simply created more vapor than you were able to condense. no mysteries here.

The point @Akoyeh was trying to make is that you can have a clog/restriction in your vacuum path that does what @YeahBet is saying (creating more vapor than was condensed [in the condenser]), but which still looks like strong vacuum. If the gauge is near the pump (such as when it is after the cold trap, as is advisable), then a clog or restriction in the line between the gauge and the system can still create a significantly higher system pressure than the gauge reads! The reason the fog forms is that the vapor IS condensing (be it by higher pressure, lower temperature or both), just not where you want it to.