Like the post it note, artificial sweeteners, my oldest child, and teflon, I discovered this by mistake. This is not a polished SOP but works, but is repeatable and scalable.

I had a piece of lint fall into a batch of isolate and decided well crap, we better dissolve in solvent and refilter before continuing on to make tinctures. After filtration I decided to start purging the solvent as fast as possible. Heat, Stir, and vac. What happened was not only our mantle not able to keep up, but instant crystallization of CBD and frost developing on our flask.

So after loads of research and R&D I give you FAF Isolate, (fast as fuck).

We use hexane for this SOP due to its BP. Pentane is too low of a BP so it will work, but recovery of solvent gets difficult. You’ll see why.

So when we make isolate, we supersaturate the solvent and use cooling to make the isolate crash out. When warming up your solution and dissolving you are supersaturating the solution. As the temperature drops, the solvent of choice loses its affinity for the compound and pushes it out. When it comes to CBD, it will crystallize.

Well temperature swing crystallization is only 1 of a few ways to do the deed. Evaporation is another way. Remember making rock candy or salt crystals as a kid? Boil water and add salt or sugar until super saturated then leave out. Not only is cooling making the compound drop out, so is evaporation. Under normal, atmospheric conditions with water this takes a long time.

So lets speed it up. Most of you have the tools to know how. How would you remove a solvent quickly? You can heat it up to boil it… but the increasing heat of boiling increases the affinity for the compound and doesn’t really work well. BUT. As you know if you decrease the pressure you decrease the boiling point. Lets decrease it to the point you don’t need heat at all.

So take hexane, which usually has a bp of 68c. If you introduce a lower pressure you can get that down to below room temperature. Using a handy bp chart we can see that at a vac level of 100 torr, or 100 mmhg its about 15c. When subjecting the solvent to this temperature not only are you evaporating the solvent off at room temp, an endothermic reaction occurs and lowers the solutions temperature. You’ll notice as it boils off the solution gets colder… To the point ice will build up around your flask.

Eventually not only is the super saturated solvent getting colder, the evaporation increases the concentration even further. It gets the point where it can’t hold onto the compound anymore and crashes it out. At this point, boom… crystallization.

It happens fast, and we’ve been driving by skill but here’s pretty much how to do it.

Setup in series your vessel with hexane/distillate solution of choice… 2:1 to 4:1 (hexane:oleoresin)
Then next your cold trap. You need dry ice or cold finger. If your bp is 15c, you need the cold trap colder. for example if you pull down to 1 torr, your boiling point will be -50c… your cold trap will not be able to keep up and you will lose solvent. We use a chemically resistant XE rated diaphragm pump for this so we have the added advantage of our exhaust going to another cold trap. If done right you wont lose your solvent to your pump.

You need a regulator or valve first in line. Turn on your pump, keep your valve/regulator open. SLOWLY close your valve/regulator until you get boiling. When you start to see boiling you’ll see temperatures drop in your flask. When around 10-15c in your flask and the endothermic reaction is doing its thing, keep it there. WATCH YOUR COLD TRAP. If using acetone/dry ice it WILL boil over. Keep it there. It should reach equallibrium and you should have a nice boil and all solvent being recovered. Keep it there and within minutes… 20-60 depending on flask size you will see it start to get cloudy. If using a stir bar STOP. A stir bar helps speed the process but can cause too much evaporation too fast overloading your cold trap.

The reason its cloudy? Isolate. Between boiling and stirring (if used) you created a ton of nucleation sites and as it gets colder and the solvent evaporates, the isolate forms. STOP, slow down the boil. Remember, your driving by vac level and not heat so adjust until slow simmer, or no boil but still seeing recovery. You already created millions of isolate crystals so the rest will happen naturally. Within minutes youll see more and more isolate and to the point you have a nice fluffy flask filled with isolate and mother liquor on top.

When satisfied with your yield stop vac. Your solution should be ice cold still. You can use your regular procedures to filter and rinse your isolate as normal. Keep everything cold to ensure no loss of isolate. At that point you can recrystallize if needed.

There you have it. We’ve made 1 kilo of isolate in under an hour.

I often precipitate some CBD from mother liquor by evaporating alkane solution under vacuum in a rotary evaporators, but I don’t apply heat to the boiling flask. The evaporation cools it down, and I’ll have as much as 1-2 kg of isolate floating in a 50 L flask after about an hour as well.

I’ve also been achieving rapid crystallizations by taking a highly saturated solution of distillate:alkane (1 : 1 or 1 : 1.5 usually) and I chill to -30°C or -40°C. The solution is oversaturated and fairlyy viscous, but not frozen solid. When I dilute this solution with room temperature alkane, the CBD crashes out immediately, with or without agitation. It’s not pure, but it precipitates as fast as immediately and as slow as 5 minutes. A quick cold solvent wash takes care of impurity and the “wash” solvent has very few impurities and can be precipitated once more with the above rotovap method, or by chilling the solution to -30°C to -40°C.

Adds a few steps but it’s fast as hell.

yup noticed that too. here’s an hour or so at room temp 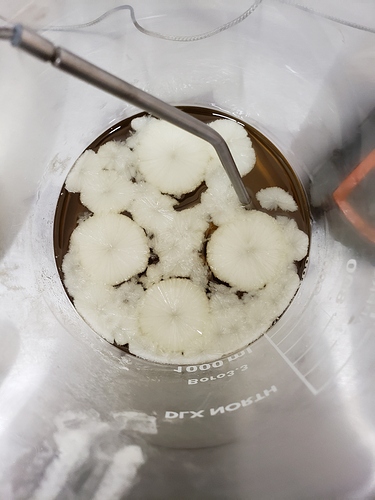 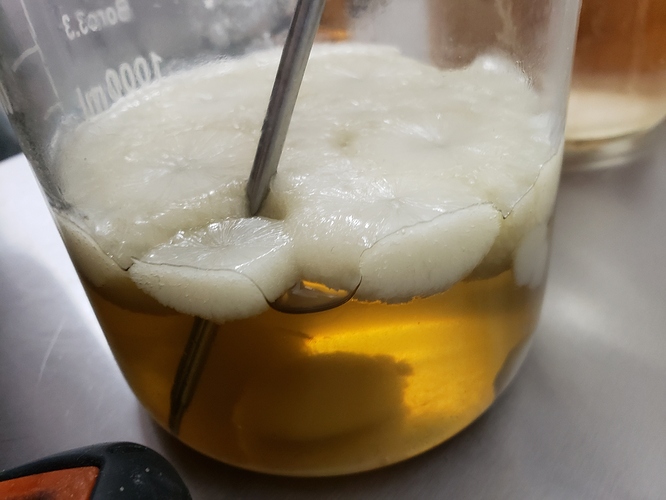 What was happening when temperature rose to 35°C?

severe crystallization . pics I shared happened at room temp. solution temp went up. under vac, and boil, temp goes down

Very interesting that it got so hot during crystallization, without any heat source.

it was a new observance, not related to my original post. but happened nonetheless. pretty much I had the solution sitting there, stirred in frustration then minutes later crystallisation. still had the temp probe inserted and noticed the temp increase.

I wonder if this will work with cbda? Ill have to try got a bunch in pentane though

Do you have the rotovap spinning or still when crashing out isolate from mother liquor?

I tried it today. It never got below 41F. I got frustrated and let it sit for lunch when i came back no crystals so i was thinking maybe its not a temperature or boiling thing ITS A PRESSURE THING. I took to it at 70 degrees took it to boil let off the valve harsh “thumped” the molecules creating a pressure shock. Did it a second time and bam isolate started falling out like crazy.

Maybe try putting fresh hexane in the ball and heating while spinning to dissolve all the isolate then pour out into a tray to crash it again.

I’ll be trying some mother liquor/hexane in my rotovap with it not spinning and see if I have any different results.

Try my thumping method. 90% vac harsh pressurize. Release 2 or 3 times. Then pour your flask out into a jar and watch what happens.

when pulling vac initially make sure you are getting some sort of boil or stir. The agitation creates the nucleation sites.

Is the solvent completely removed from the solution at the point the temp starts to drop? If not, at what ratio of solvent to distillate does the temp drop happen?

no, if there wasn’t solvent then the endothermic reaction would not occur and cool the solution. Playing around with ratio’s vs time we have noticed that putting in too much solvent will cause a temperature drop so much too soon that evaporation slows to a crawl as the solutions temp drops to below it’s boiling point at that specific pressure if that makes sense. You can break this by getting deeper vac, or of course applying slight heat, sometimes even just holding the glass. Which explains @Apex situation where he did not get crystallization until adding heat. If the endothermic reaction from evaporation cools the solution too fast without increasing saturation the cbd will not crash out.

I got it to nucleate and form a few crystals, but I think I was a bit light on hexane at that point. What is your estimation of the ratio of solvent to oleoresin after initial evaporation?