So has anyone at all managed to get D8 thats free of unknowns and leftover D9?

I live under a rock + a few sediment layers.

not even pharmaceutical D9 API is free of D8 so…

Makes sense. More curious about the state of it rn and if anyones come close as still know people claiming to have 100% safe and compliant D8 with no unknowns. And its sketchy

Bro, you thinking about going to the D8 convention next month? There’s a convention going on at Sea World on the 27th and 28th. If it’s something you might be interested in, I’m happy to offer my place as a place to crash so you don’t have to get a hotel room. You know, if you’re into checking it out…

Theres a D8 convention? Jesus that sounds cringe as shit but I’d be down to go for the meme if I have nothing going on.

All of Future4200 should crash this event

Show up with signs and chromatograms 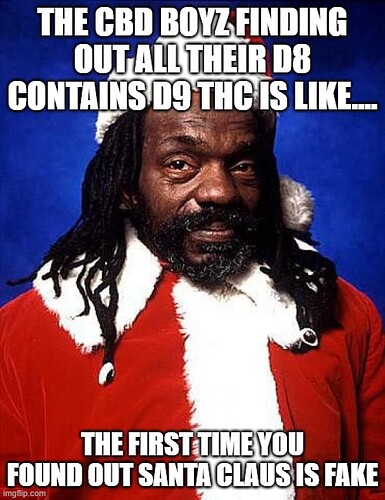 But who TF cares is there’s d9 in there
What’s up with all the snitching that has became like commonplace in cannabis now? So much damn greed it’s lame

But who TF cares is there’s d9 in there

There is a million reasons why it should be free of d9.

F the govs and the boys and the employers

IMO it’s the laws that need the scrutinizing

So for decades the weed industry flipped the bird to gov and alphabet soup but all of a sudden d8 (which has been researched since 1971 to my last rememberance) comes out and everyone wants to suck their dick? What is this?

The point is them telling people “it’s legal, won’t fail a drug test, etc” and then those customers get screwed.

convention going on at Sea World

Fuck Sea World! They need to disappear! Boycott them. I have for over 20 years. Cetacians should not be in captivity!

Sorry for the aside. I feel very passionately about voicing opposition to them any chance I get. Carry on.

Fuck, I haven’t been to Sea World literally since I was in like 7th grade in school. I’m just looking to go to meet people if I go. Shake some hands, smoke some doobies, whatever. I’ve never been to anything like it before, so it should be interesting none the less.
But yeah, fuck them.

You’re not wrong, and at the same argument … infighting amongst similar/same industry is exactly what they are hoping for as they continue to spread misinformation and smear campaigns on otherwise good people. Nobody reputable in industry is telling consumers you won’t fail a drug test. Has literally nobody learned anything from Gamergate … or media in general for the last 6+ years?

Is it really a coincidence that only after InBev and Philip Morris spend $4b+ combined on the industry that we get this bullshit anchor bill from Chuck Schumer? - This is all classic divide and conquer that’s been used to take over anything in the history of mankind.

There should be no fighting about any of this, and more discussions on how to jointly take down all the bullshit

Thank you for listening to my TedTalk

Cannabis operators (not all) see the massive demand for ∆8 as directly impacting sales. You’re right there is friction there, but also within the cannabinoid hemp segment alone. ∆8 sprayed flower is very popular, and competes with MJ flower sales. What is added to spray effectively?

The ∆9 content is a practical concern, regardless of how one feels about the issue. There’s just not much chance legislators will look at the issue and say, “sure keep it rolling”, with sales to 18 or 21 year olds, depending on the shopkeepers policy. Over a dozen or so states have said, “no way”. Especially those with a cannabis lobby.

The critical issue is lack of safety testing. QR codes with COA’s are commonplace in MJ, should be required for other extracts or isomers like ∆8. There’s a wide range of expertise converting to ∆8, and barely anyone is attaching a COA to ∆8 carts.

Who is supplying lab analysis with their products, aside from cannabinoid profile? I can’t find it. So much historical concern over residuals in hydroc extracted product, and the resulting shift to solventless, or just better all around product finishing. Now we’re going to pivot to an untested product made by youtubers and pros alike, with who knows what residuals? Smacks of Vit E acetate from a public health perspective, regardless of the reality.

Too many inexperienced operators slinging it. Not a solid argument to say that there’s all kinds of other ways to encounter contaminants. Its like an apple farmer saying no big deal about the residual pesticides, because tomatoes have then too.

The market has to be regulated, too much greed out there, cutting corners, or just overestimation of ones abilities as a chemist. Some states have just pushed the easy button and banned it. Anyone with a financial interest in ∆8 is resistant to oversight, but that ship has sailed.

Cannabis operators (not all) see the massive demand for ∆8 as directly impacting sales.

I’ve seen this claim get sent around all over the place but I have yet to see evidence. Where is the evidence that cannabis sales have declined in any legal states, much less that D8 is the cause?

There’s a lot of safe d8 just ask those who claimed it first how their 3k a liter marketing worked out.

Ya I think all the data show ever-increasing sales in cannabis. Black market MJ is much more of a threat I’d think.