I just finished filling about 80 carts. Started with waxy oil, winterized and reintroduced Hemp terps. When I left the oil on a hot plate, it would become bubble free, when stirred it created a large amount of tiny bubbles, I’ve seen this before, all the bubbles come out when left still on a hot plate.

I filled the carts with my cart farmer gun, the oil wasn’t that bubbly in the gun, only a few bubbles when the oil was pulled into the gun, even after injecting into the cart it didn’t seem that bad. I had the heat pad set to 85c not sure if that was too hot.

After capping all of them I noticed the insane amount of air bubbles, I’ve never seen anything like it before. I’ve seen it with the last cart, where you inject some air because you’re out of oil, but I’ve never seen the whole batch bubble like this. I figured they would settle out, but it’s been 8 hours at 65’f and they haven’t budged much.

When I was vac purging my winterized oil, my vacuum gauge started leaking. I caught it quickly and don’t think much if any glycerine made its way into the oil. The bottom of my chamber is convex so the oil settles to the side leaving the middle oil free. I came back and found 2 drop of glycerine in the middle, which I wiped up with a paper towel. I didn’t think it would be an issue, since glycerine is used frequently in vape products.

So I ask you guys, does this seem like an issue? I’m about to throw them in my vac chamber without pulling vac and let them sit at 100’f to see if the air bubbles will settle 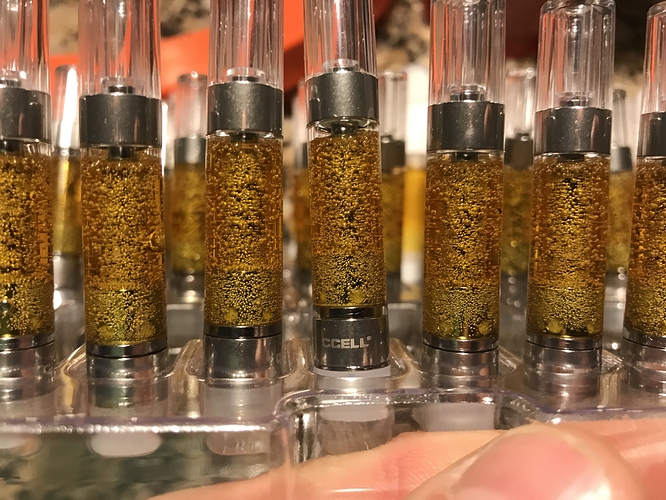 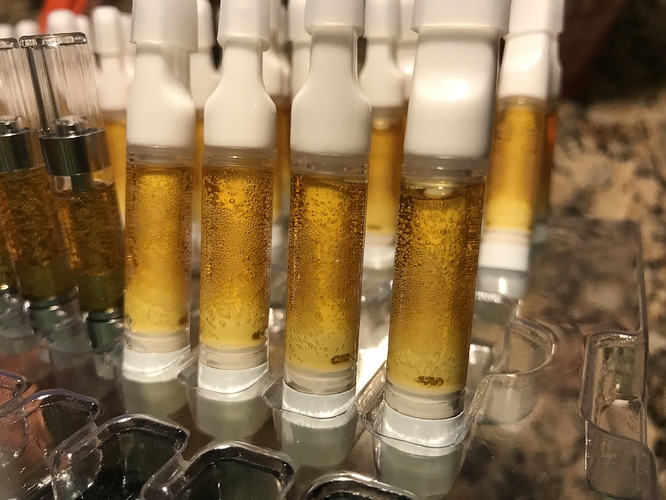 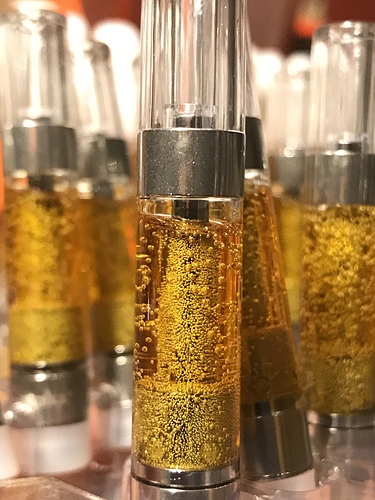 They go away quick. You only added hemp terps?

Only hemp terps. Purged my winterized oil @ 150’f for 7 days. I would “stir” the oil in the chamber every few hours by tilting the chamber and allowing the oil to flow around the ptfe sheet it’s on, while pulling vac.

Now I’m kinda concerned about my source oil, since I have no way of testing it. I use to make my oil from flower, but the last few batches I’ve bought oil from a friend

I had the heat pad set to 85c not sure if that was too hot.

That is too hot IMO. But this looks like a purge issue.

What is the source oil and do you know the %'s and how it was made?

If o had to hazard a guess it’s decarbing as you’re filling.

Is it fully decarbed? Something’s flying off… Either it’s co2 from decarb or solvent.

The heat pad on the cart farmer 50 reservoir was set to 85c, I thought that should be okay because the oils doesn’t spend much time in the reservoir. I had it set to 75c like last run, but this oil was thicker so I had to bump the temps

Don’t know how the oil was made, I’m lucky if the guy gets the strain right, sometimes he doesn’t even know that much. He always sells it as shatter but had no idea how it’s made, and to be honest, it’s not shatter, it’s pretty waxy.

The source oil was weird, super terpy and greasy. Usually the oil will dissolve in ethanol within 24 hours with minimal agitation. However, this oil, even after 24 hours was still very solid, took nearly 2 days and lots of agitation to fully dissolve, which I’ve never seen.

I do not decarb my oil, other then the decarb it gets while vac purging at 150-155’f for a week, or the few hours it spends at 165’f to mix terps. I don’t have a way to do color remediation so I try not to decarb too heavy as I don’t want to darken my oil.

This is exactly what it looks like when I decarb oil while inside of a cartridge with a torch. Your heat doesnt seem high enough to decarb… Is the filling gun heated or the needle of it?

I used a cart farmer 50, the heat pad is only around the reservoir, the oil was in the reservoir for 10~ minutes. The head pad was set to 75’c at first, then I bumped it up to 85’c when it was too thick to smoothly draw into the gun.

I’ve been smoking one and it seems fine, no weird taste or burn.

Hit em with a heat gun if you want the bubbles to rise faster.

Have u tried just simply warming them up? Just trying to fix ur problem

Never seen this though weird

Definitely looks to me that the oil needs to be decarb better. Bubbles will go away but you will need to top all of those carts off. Heat gun blast worked for me but so does a heat lamp.

So 85c is too hot. Consider dialing down the temps first. I’ve never had to go over 50c in my systems regardless of the dilution. Did you experience level drop too?

I’ve seen bubbles like that form inside carts with high percentages of cannabis derived terps added back into the oil. Not all strains do it. Typically the bubbles dissolve (?) back into the oil after a few days.

Sounds like u got ur mix stirred up super hard and bubbly, you loaded it cooled and the froze…ur gonna have to heat those up move those bubbles to top…u should have let the bubbles disappear before loading into cart farmer.

Can’t recommend the product enough lol… But get an Excalibur food dehydrator off of Amazon. Throw your carts in there on low to medium and they’ll settle

I’d decarb hotter than you are

Definitely looks to me that the oil needs to be decarb better. Bubbles will go away but you will need to top all of those carts off. Heat gun blast worked for me but so does a heat lamp.

this is how you make improperly decarbed carts start leaking out of the airflow. Found this out first hand the hard way.