Anyone Run the East Coast Haze?

Topic recently came up with a buddy. Does anyone run it anymore, is it extinct?

Such a great herb we are surprised nobody is mass producing it, or at least here in the far east.

is it actually called east coast haze? or are you just referring to the old haze or “piff”

Yes piff, some people around the country consider piff to be just good bud. I’ve heard people is MA call it church.

Either way Snype has the real deal piff cut and the S1 and many others but I know he has it for sure I think he exposed JJ for using the s1 in breeding. Hes out of Maine only one local to openly sell it. I know others got it but theyre probably harder to link up with. His @ is SnypeWonka on Snapchat

I came here to say "piff* but someone already said it, so…pfffff

There is a lotta black haze on my Instagram feed. It’s here in Miami. Piff/nyc haze are the same.

Alot of people were asking about the Black Haze cut that we are working with, so I figured Id post some info..This is a description from a freind that has been smoking the Black for nearly his whole life,,,, Despite not being really considered a...

This is my cut. You can tell by the … all the time which was cut and pasted from a description I gave on it in 2007.

And if you click that link and look on the second page you will see this bowl full of black haze. Crazy I still have that scale bowl after 20 years. 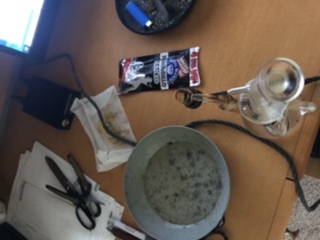 is that the haze that had the very pungent almost chemical like smell? I remember a haze from the aughts like that and it was amazing. Haven’t seen it over my way in 12 years. thought it died out. @StoneD and I were just talking about it a few weeks ago.

I’ve heard it called that too but I never thought it was very close. Then again, I don’t have cats. I’m glad this strain is still alive and close. I remember paying $50 for 2.5 grams back in the day lol. so black haze is the official name?

I’d imagine if we’re all talking about all the haze that was up and down the east coast in the 90s-2000s for a good 2 decades. Then it was probably black or silver haze.

no haze for you!

I hear all these arguments about people selling fake black cuts and big controversy from people selling cuts in other states. Every month I usually getting someone Hitting my ig dm asking if some little seedling looks like the real black.

Like there is some holy grail black haze and only a few have it. I passed this cut around like the plague in the 2000s. I had an elite cut club for like 10 years and passed out some like they were going outta style.

I think he cures for too long. The smell completely gone but maybe the smoke is that much better. Haven’t smoked any tho

Yes, east coast Miami to NY and north… Miami is the only place I know of in country to get but quality has been horrible. Started in the 90’s with the green haze, then changed to silver/brown sorta stringy stuff in the early mid 2000’s. Now it’s all super airy dark and haven’t smelled the real thing in almost 10yrs! But I tell you what, when/if I come across it all I need is a whiff to tell what it is!

Is it only the dominicans that have it down there? Back in the mid 2000’s we worked with some spanish cats on 144th, last time I had the real thing. All the guys I knew over the yrs here and in FL were dominican.

I love seeing regional weed preferences. In Hotlanta, it was Sour Apple Diesel. In SW Michigan to Chicago it’s Glue.

Its know as the Cuban Black haze. I actually picked it up again from a friend. Its been 15yrs since i run it but its what i ran exclusive for 5yrs. In all actuality i owe it all to the black as thats what i started with.

I really owe a lot of what I am because of the black haze too.

While people played with BC’s. I stayed local. Same when we had the Cali invasion.

It’s just something about the black.