Why are my seedlings dying?

Some of my seedlings, mostly a specific strain, start out fine and then start becoming unhealthy and die. Here is some pictures I took today of good and bad seedlings. 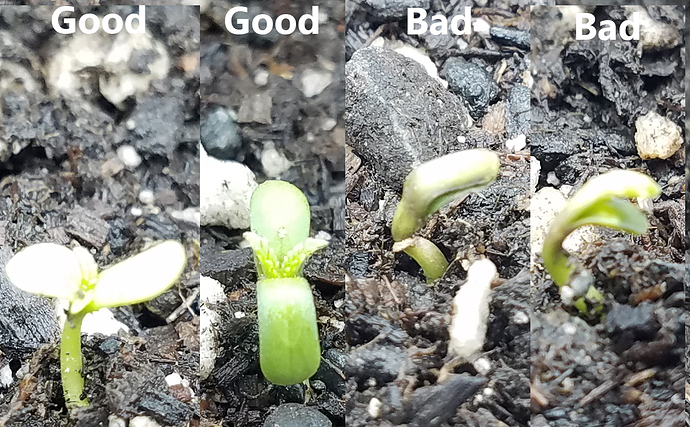 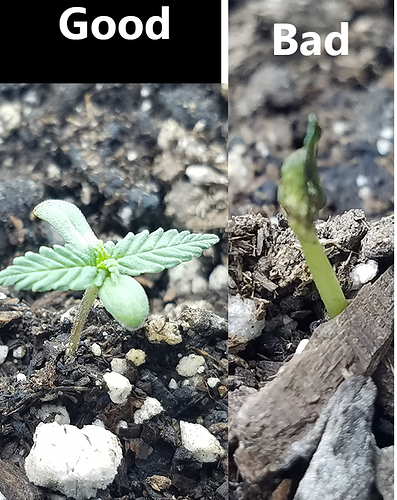 Most of my seedlings have always done well. What’s some possible causes?

For a seedling that medium looks very wet. Its easier to recover from under watering than over watering.

I was going to say the soil looks very wet! Are you feeding with anything or just water ?

Looks like they haven’t shed that membrane (don’t know the correct term). Hard to tell from the pic. Sometimes they need a little help to open up.

I would add a 20-20-20 mix. That might help revive them. Just make sure not to overwater. As @WeedThePeople said, it is much easier to recover from not enough water than from overwatering. Think of it this way. It is easier to help a human get out of dehydration than it is to help them when they have drowned.

I’m using natural spring water and some PH down to the water. I’m probably watering too heavy, I guess I’m worried the seedlings aren’t able to get enough water from the soil since their roots are so small, so I mist with a water bottle. I probably should stop! What are the best indicators to know when to water your seedling?

You said it was mostly one strain. It could just be bad seeds.

What makes you recommend synthetic fertilizer for an overwatered seedling in soil?

That is a very true statement. Sometimes you may just have a case of poor germination.

The container seems a bit large for a seedling. I assume your trying to water the entire medium. Consider the lack of roots per amount of medium, meaning give enough water to feed the root ball. Do not focus on saturation of entire medium.

Is that Promix your using? Try starting them in Rapid Rooter plugs or rockwool cubes.

The bad pictures still have that seed shell membrane attached. Definitely too wet, you shouldn’t water seed starts… maybe once a week unless medium is super dry, and only then just enough to make the soil “moist”. Pick off that membrane and let them be.

Just get some jiffy pellets and start the seed in them! Keep moist (spray bottle)…When the main root comes out the jiffy pod place the pod in a solo cup full of perlite with a puncture hole a few inches up on the side (making a hempy bucket passive hydro). The plant will root fast and be easy to transplant the solo cup will fill with roots fast

No fertilizer that small. Make sure water droplets don’t lay in the middle.

Heres a neat trick, get a clear cup and a solo cup, cut holes in the bottom of both. Place the clear cup in the solo cup. The clear cup will allow u to see root development and overall soil moisture and the solo cup will shield those roots

For seedlings, i just make sure soil is nice and moist when i first sow them then dont water until i see the top get dry usually 5-7 days later. Once they on there second or third node u can start misting and apply very light foliar feed. I dont think u need to add any npk nutes to the soil until they are on node 3 or 4. Worm castings will do well for the first 4 nodes, then slowly bring in ur npk nutes (1/8-1/4 strength) if ur soil is kinda bare.

For starting seeds, i like the paper towel method, then put it in a zip lock and tack it to the wall. U want it to be vertical so the roots think they are digging “down” instead being on a flat surface where they think they are hitting a rock. Usually 24-48 hours i sow the seed with the cup 3/4 full, so the seed is just poking out and the root is ahoved in a hole. As the seed grows i fill the room around it until its done stretching (usually 72 hours after being sowed). I leave the first cotyledon leafs sticking about an 1/8" above the soil, that gives the plant a good support stem to start its growth.
At node 4 is when i start bending it over or topping it

Don’t worry about the roots, watering less and only with water in this stage helps the roots become established

Could just be a bad batch of seeds if it’s just the one strain doing it, maybe not your own doing. Are they stable genetics from a reputable breeder? Are they testers? Have you showed them the same love and affection as good ones? What variables (if any) are there from the good vs bad ones other than the strain?