What happens to fats/waxes in acid/base? (Saponification question)

Was thinking of doing some acid/base with my acidic cananbanoids in a solution.

If I had a concentrated solution of thc-a crude in an alakane (let’s say pentane), then did a base water wash (I think someone’s got an SOP around here) at pH 12, to pull all the acidic cannabinoids…

Where do the impurities end up? Would the fats/waxes stay in the Pentane? Would the precipitate in a saponification of sorts that I could filter out easily?

I’d assume chlorophyll and colors would stay in the basic water solution.

Some fats will stay in the nonpolar solvent, and some fatty acids will likely create nasty emulsions in alkaline conditions. However, In instances where the product you’re trying to isolate is soluble in water, an easy dewax method is liquid-liquid extraction with a nonpolar solvent.

Here’s an old example of mine, with photos. I did not successfully isolate THCa but one example of emulsion at high pH is shown:

@Photon_noir I read in an earlier post you said conditions that basic should be avoided. Is it for isomerisation reasons?

Playing with Acids and Bases need to be done with precaution. to little will not have an effective result, too much and you will have unwanted reactions, leading to degradation of the desired API (Actibe Phyto/Pharma Ingredient).
The same way that the PH of the Oil in the Pot will affect Isomerization during Distillation, leading to (Either Unwanted or Desired) THC conversion into other cannabinoids; I have identified free radical formation, and subsequent conversions, side reactions, oxidation and degradations that occur During harvest, extraction, winterization, distillation, and chromatography. So always good to trust the science, but verify with lab results Often.
For Example, Chromatographic separation of cannabinoids can be done with majors and minors isolated using basic solutions, however too much base can lead to Saponification of the Fatty Acid chains (Saponification is the conversion of Oils into Soaps as ‘described’ in the Movie Fight Club). I would Avoid going above PH12 for this reason with non refined oils.
CRC media, among other Physical characteristic’s, often use a Slight charge (Acidic or Basic) to ‘attract’ the undesirable compounds, while letting the cannabinoids pass through.
With that said, there is still a massive field of research yet to be fully elucidated, in terms of using Polarity to purify cannabinoid APIs, in addition to the Solubility, freezing / boiling points, and physics currently used in extraction. Isolates and contamination remediation has thrown the doors wide open, but fear / ignorance and lack of experience has kept us in the dark ages
As the industry transitions from Purely extraction into biochemically semi synthetic cannabinoids

Please tell me to what you are referring, @tweedledew … conditions “that” basic should be avoided? Under what circumstances? What is that?

Hey, I can’t find the thread from a while ago, so apologies for that. I think you base-ically said pH conditions above 12 should be avoided.

I tried an experiment with a 5% naoh solution and just added it slowly until the water layer was around pH 10-12 from being neutralized by the acidic cannabinoids. I neutralized and it seemed like I’m off to a good start. I winterized it heavily just in case to avoid the potential saponification/emulsion.

To answer the OPQs…

The impurities will end up separated into both the polar and also the non-polar phases, as well as the emulsion that forms between them.

If you have fatty acids, you make soap. Triglycerides make glycerin (&) soap. Wax is pretty impervious to alkali (and soap, interestingly enough), but phospholipids can dissolve into slime along with any silica from cell walls when subjected to alkalinity that strong.

You might wish “chlorophyll and colors would stay in the basic water solution”… but assuming? What is your reason for that assumption?

The one thing you did not mention is the THCa, which seems siily considering it is what you actually want out of this whole ordeal! The THCa would end up all over the semi-emulsified volume… some in the soapy emulsion, some in the water, and still some left over in the non-polar, pentane.

By adding the naoh solution under agitation until the pH goes up, leads me to believe I got a nearly full acidic cannabinoid pull from my alkane. I didn’t actually see any emulsion on my winterized solution. A friend of mine tried it on a non-winterized solution and had a nasty emulsion form. 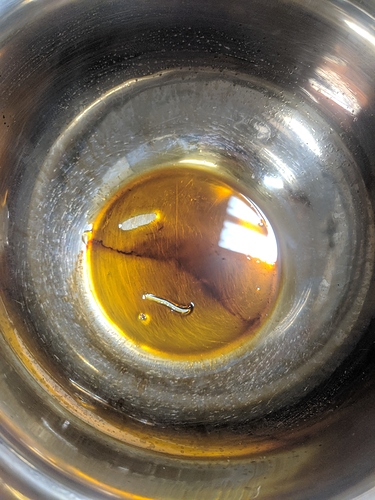 As far as the chlorophyll assumption. I was reading something on how to make chlorophyll water soluble. And a strong base seemed to get the job done

Ah, very good! Thank you for the updates! It’s true that alkaline water dissolves more chlorophyll than plain water, but certain acids can also denature and/or precipitate it from aqueous solution… so it would make sense that an alkaline to acidic shift would assist in LLE.

Do you know of/think there’s a way to “winterize” in this LLE system? If I’ve pulled the majority of the cannabinoids out via basic water wash and you’re not as worried about damaging them… Is there any kind of more severe pH swing that could really clean up trace fats/wax?