Thank me later Δ8THC via ptsa

Oh, I know. I was just stating something that is both true and loosely relevant.

Drying agents aren’t very practical for large amounts of water. Of course, if you use heptane which has an incredibly low capacity for water, that might be a non-issue

I’ve never seen PTSA hit above 70.on d9, and the anhydride, if anything, is even more vigorous going to d8 at warm temperatures.

right on. When I first was discussing this with the chemists who taught me this, I said the same exact thing. I’m glad I could clarify.

The mono hydrate contains crystalline water so you would need to remove it to have a complete dry input for the reaction. Making it anhydride more suitable to start with as it doesn’t contain the water content or other impurities.

well, as someone else said sodium sulfate will suffer with larger and larger volumes of solvent. I don’t have a citation to backup what I’m about to say - but I’m under the impression that if you must use some sort of solid to dry bulk solvent, you’re better off with mole sieves. Partially because they’re reusable if you go to those lengths to re-dry them and have a pretty good lifetime before they’re saturated, and partially because they do a more complete job at removing water across a wide variety of solvents. For instance, sodium sulfate will not work very well for ethanol but mole sieves will.

Sodium sulfate does a majority of its drying quickly, and the rest of the drying rather slowly which is why you’re supposed to let solutions dry over sodium sulfate for some period of time (mole sieves also several hours to work their magic). Not to mention, if you keep introducing water to sodium sulfate it becomes a brine solution that could contaminate your system.

Distillation is pretty cheap, and obviously scaleable. If you wanna dry 100L of a solvent with sodium sulfate, you’ve gotta get a container and add sodium sulfate and your solvent and find a way to agitate it and then let it sit for a few hours and then remove the dry solvent without getting it wet and without taking solid sodium sulfate with you. Whereas with distillation, you dry large volumes all at once, its pretty quick aside from heat/cool times, its reliable, and you don’t have to buy a desiccant or worry about filtering out desiccant. However, your solvent must have an azeotrope with water or at least have a boiling point above 100C to push the water over. You can’t really dry water from DCM azeotropically.

A real nice way to do it is right before you run your reaction. Whatever solvent you need for your reaction, charge that volume to the reactor plus some additional solvent to account for what you’ll lose in distillation. For instance, if you need 30L of heptane for your reaction and you add 35L, then distill off 5L, then run your reaction in the dry 30L that remains. That way you don’t need to store dry solvent, you just dry the solvent directly before running the reaction.

So would it be fair to say, sodium sulfate is particularly useful for drying materials other than solvents that don’t have a large presence of water, when the dried material can be easily separated from the sodium sulfate.

Sodium sulfate works pretty good for heptane, hexane and toluene - and in fact I dry just about every product solution over an excessive amount of sodium sulfate. Its just not instantaneous, and I have to worry about filtering before I rotovap.

Sodium sulfate works ok for small-ish volumes of solvent that don’t contain a lot of water. Like if there’s enough water in my heptane that I have a phase separation, sodium sulfate probably isn’t appropriate.

I was primarily referring to other materials in the reaction besides the solvents, such as I have seen sodium sulfate called for in drying CBD isolate as an example.

I appreciate the info!

If you’re scared of toluene oh well, handle it properly & you’ll be fine as long as you wear ppe.

did you mention this in your SOP?

The details of process doesn’t not contain warnings as that would be above in the format on the sop. Yes it will include ppe handling & care etc.

What temp do you set on your roto when recovering heptane?

It generally hardly gets over 60%, and by then, there is already 10-20% d8 in there.
And as CBD is depleted, there’s no more d9 production and thus faster apparent conversion to d8…

I don’t know if doing the reaction in inert and dry atmopshere has that a notable effect on the outcome.
I’m not saying it may not, I don’t know this.

But if the goal is the perform the reaction in anaerobic conditions, then some modifications should be brought to the SOP.

Still I don’t know if this makes a major difference.
This has to be tested and analyzed.

@Kingofthekush420 once doubted the necessity of dry
With acids such as phosforic YES you have to work dry
With ptsa it doesn t matter much working dry and with anhydrous ptsa (bought) max D9 yield has always stopped at around 70% D9
Although @Cheebachiefextracts claims it is possible and I think he is using a Lewis base in the flask to buffer the reaction
Mgso4 doesn t get a higher yield but it does improve the rxn conditions one can run hotter without the red coloring
I am preparing runs with diffrent salts to check their valeu
Several birds are chirping reagents that get 99% conversion to D9 in wet conditions
Sop that have cost them all limbs and wings
But ok it seems possible
@jebril I think you are one off the few to crack this sinse I suspect it s a molecular sieve that does. The trick

@Roguelab we all are dedicated since last year to crack the codes for high d9 conversions. My focus is mainly on ptsa. After many runs I started to doubt, that water has a big impact. And to be honest, this is always a lot of work to get everything dry.

Therefore I started a run with phosphoric acid, to see if this is always the case or just relates to pTSA.
Usually we used that dried “magic phosphoric mix”. I handeled the stuff like it would be pyrophoric to get to a few ppm residual water, but it always ended up with max. 50% d9. Before the CBD was fully converted, most d9 was already gone to d8.

And this here is my result with 85% phosphoric acid in denatured ethanol, without inert gas. Nothing was dry and the acid was straight out of the bottle. 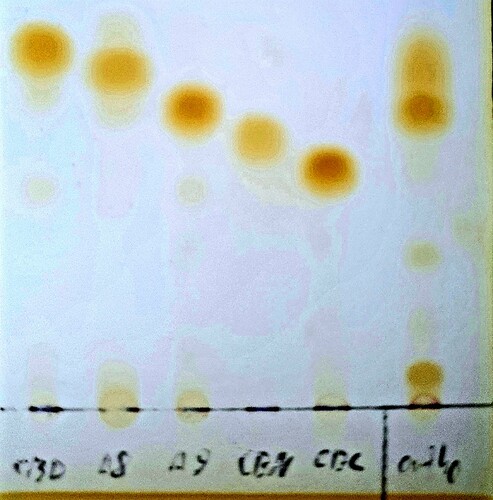 For sure there is a good amount of d8 and some CBD left, but its mainly d9! It may have other impacts, you could see on a chroma, but if high amounts of water would cause the rxn to favor d8, I would not have been able to achieve this.
With the added acid, the water content was more than 5%. This is 50.000ppm