How could I incorporate a cryogenic oxygen tank into a closed loop?

I have come across some cryogenic oxygen tanks. I am wondering how I could incorporate these into a closed loop without modifying the tank. I have been reading a ton on how these tanks work and I think my mind is just a little too fried so I’m asking for some help from you guys to take a look at the theory of operation and tell me if there’s a way that I could incorporate this into my close loop without having to modify the tank which is the next step If I can’t figure out how to use the tank as it is.

Get it peer reviewed as a ln2 or liquid co2 Dewar and use it for chilling, those things are expensive

I don’t know what you have in mind but cryo tanks are big thermos bottles and are not pressure vessels.
They will take some pressure but not much.
Pressure that thing up and you are likely to incorporate yourself with your ceiling.

We got a deal on a couple dozen of these things (60L ones). I think they’re only rated for like 60psi but obviously check the nameplate before use. I welded some KF50 fittings and a sight glass on one and made a massive dewar-style cold trap for our vacuum pump, it works the tits. Working on refrigeration skid design to turn the inner chamber into an evaporator for an R23 cascade system.

Just some ideas, completely not related to CLS but if you get a $20/pop deal like we did I figure it might give you an idea

I have several to play with and I’m interested in hearing more about your cascading system idea. I also have an interest in building a cascading system. But as far as using the tanks for any type of storage for anything other than cryogenic fluids, there’s really not any other uses for these tanks as is without modifying them it sounds like.

How could I get it peer reviewed?

I am very interested in your cold trap as I’ve already been considering that idea and if you have any pictures you wouldn’t mind sharing I’d be happy to see what you’ve done to help me with my idea.

Yeah I was thinking of popping out the ruptured disc and adding some valves to jacket the inner tank.

Call PSI, xtractor depot, 3pcertz, or ask the local welding supply store to trade / buy them off you

I’ll take some pictures tomorrow. The biggest bitch was cutting the end off and welding it back on because they wrap the inner vessel in a foil that probably wouldn’t play too nicely with the halogenated hydrocarbons that we’re trapping with it.

Because this is a vacuum application, it’s a bit of a grey area for ASME (doesn’t technically need a stamp) but we are a code shop so we could do an official “repair” if we needed to. If you’re in a particularly prickly jurisdiction you may catch some flak so beware.

All I did was add a KF50 fitting near the bottom, another near the top on the opposite side, a KF16 on the bottom and another on the top (for instrumentation and to wash out/drain/N2 sweep without disconnecting), and a sight glass near the outlet to make sure it doesn’t overrun. Just dump a shitload of dry ice in the top (remove the dip tube assembly first obviously) and it works great. We’re running multiple rotovaps, an oven, and some generic lab vac stuff off it hooked up to an Alcatel 602LM. Took about an hour in total.

As far as making it refrigerated, I was just going to hook up the TXV to the dip tube and hook one of the other ports at the top to the compressor suction. The real trick is setting up the logic to open a solenoid to another “fade-out tank” as the system runs down and close it off to keep the standstill pressure below operating pressure if the system turns off or gets heavily loaded. I figure with R23 stepped up to an R744 (CO2) high stage which would be water cooled by our facility chiller you could get a couple good KW in the -40 to -60 range.

Good stuff…I’ll let this soak in and hit you back. I have plenty of these tanks to play with and I am going to try to make something fun with them…maybe a few flasks and possibly a roto from a few.

Good morning! If you’d like us to take a look at it and let you know what it would it would take to get a peer review put together, feel free to shoot us a DM with your contact info, otherwise please give us a call at 360-217-8446!

Im pretty sure that’s what it is. I’ve cut one apart with my plasma cutter to see and that’s almost exactly what it sounds like. 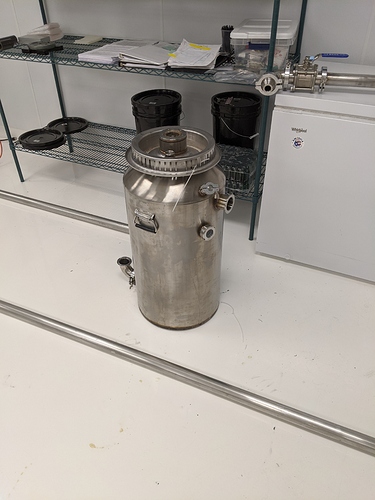 Here’s a picture of that cold trap (doing some reorganizing today. Please don’t give me shit about not brushing the welds, this was a practice piece for one of our apprentices. Cobbler’s shoes and all that

Yep dry ice slurry in the middle. On the side you can’t see I have a KF16 fitting that sticks through and is cut at an angle as close to the bottom of the tank as I could get. All I do is put some nitrogen pressure to the top KF16 and it pumps the contents out like a dip tube. Then I usually fill and dump with iso/water and dry by sweeping N2 before returning to service. 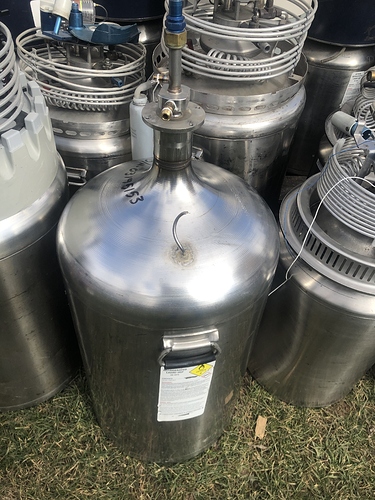