We keep having issues with the residue pump/port getting clogged. We thought maybe it was getting too cold and therefore thickening so we added heat tape set at 215°C around the arms leading to each discharge pump/valve. Still getting clogs but only on the residue side. Today I was running ethanol through the system to clean it after distilling, I had the feed @ 20 rpm, wipers @ 200 rpm, and the discharge @ 40 rpm. The residue discharge pump wasn’t moving at all. Took a heat gun too it then manually turned it forwards and backwards until it was loose and could spin normally. Even after this I had to run the pump @ 180 rpm to get even the slightest bit of flow. Ran it like this for 2.5 hours with no change. Still not flowing like normal, and the ethanol was still coming out dirty.

Wondering if it’s actually a pump issue. Anyone else have this problem using this system? Planning on just taking the whole pump apart next. Any advice is much appreciated! 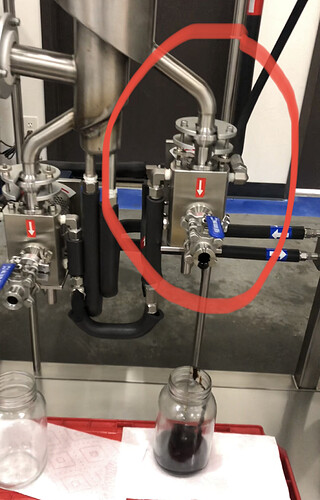 Are you running hemp?

This particular run was hemp crude that we purchased, yes. Winterized and decarbed.

What temp is the pump set at on the recirculating heater?

Should be around 120 if it’s the residue side

Honestly I’d guess it might be some baked on gunk.

You need to take the pump apart imo, the best anyone can do without seeing what it looks like is guess. I’ve fixed a few of the Chinese gear pumps that had galled after running or had clearance issues right out of the box

Any update on this?

Try heating the pump up and melting/softening the clog (I usually popped it out around 180 C). You can also try jacking up the power going to the pump. Otherwise you will need to take the pump apart, clean it, and rebuild it. What I think causes these clogs is degraded chlorophyll clumping together. The stuff is usually water soluble. What I used to do in order to avoid it was activate before winterization and during filtration you remove both the black clumps and waxes.

We disassembled both discharge pumps and found small shards of metal and debris. Metal shavings were likely the result of some modifications we made to the condenser that involved welding - evidently we didn’t get it as clean as we’d hoped. There wasn’t any large amount of baked on gunk though. I’m also not convinced that this will completely resolve the issue, as this was occurring before we ever had the condenser worked on.

We usually take heatguns to the face of the pump and the surrounding lines then turn the pump on higher speed.
We’ve seen this happen more often with worse material (like tails runs) and with CBG (this stuff crystallizes way too fast)

If you can determine that heating will fix your issue, it may be worth letting the pumps run a little longer after they are done to make sure less can settle on the gears and sieze them

@DrWHY420 is on the money, in my experience when a pump like that clogs it’s due to buildup of small black ‘char’ looking bits that are more water- than ethanol-soluble. We sometimes follow up an ethanol flush/clean with a water flush, you’d be surprised at what will come out. and as they mention, these likely arise from some part of the extraction or post-process, before it even came to you if you bought it as crude.
a tip or two: in the past i too followed the logic of, ‘it’s clogged, keep giving it higher heat until it unclogs’, but that only works to a point, and at some point work against you; the way high heat acts on retentate can make it almost polymer-like and more prone to clogging. also, high enough heat and you might cause compounds inside the pump to turn to vapor, which can cause a clog sometimes referred to as ‘vapor lock’ ie, a pocket of vapor is preventing material from even entering the pump. i’d say don’t go any higher than 150C (we don’t go any higher than 120C, if you need to go higher than that you need to just disassemble and clean the pump)
also, at one point we pursued such aggressive ‘cuts’ that we ended up with this problem a lot–it’s another way to get retentate with that polymer-like quality that just loves to clog.
also also, once in awhile i’ve seen that if the retentate is super thick, running the pump speed too fast can be an issue–it moves so slowly that it doesn’t have time to find its way into the gear teeth so the pump can’t work on it.
cheers! and good luck

That makes a lot of sense. 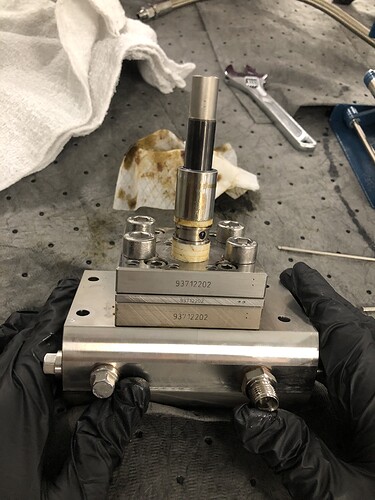 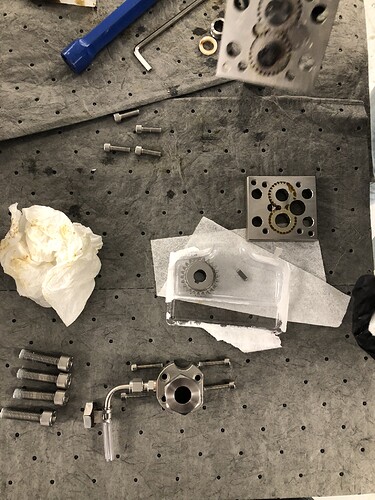 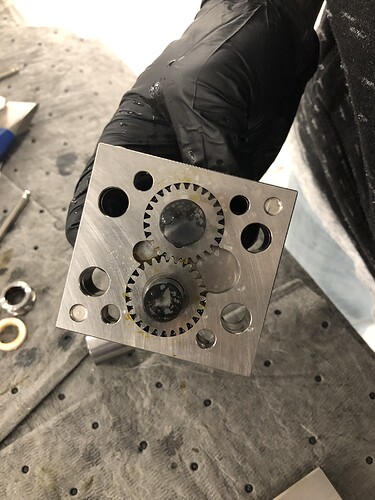 i see some residue up in the shaft, is that photo taken fresh after disassembly or did you clean it a bit before the photo? also, did you see any dark material seeping out of your oil feed port tube?
i’d recommend making sure the hex cap that tightens those bushings to the pump head are good and snug once you reassemble (not TOO tight, snug). it could be that this wasn’t tight enough before and so didn’t seal around the shaft well enough, which allowed material up into your shaft. lucky for us that material can also act as a lubricant if it should displace the mineral oil that normally keeps it lubricated, BUT, it’s also possible it contributed to this seizing problem.
other than that it doesn’t look too crazy inside of there. though these gears generally power through wtf-ever material, i have experienced a seize here and there that necessitated disassembly, because of a literal crumb of stubborn, solid material–the gears want to fit together perfectly, even the tiniest bit of grit will prevent them from coming together like they want and it’ll seize. i wish i could say i knew of a way to prevent this, but if you’re buying your feed material as crude you’ll just have to deal with this once in awhile.
frankly i kind of like that kind of maintenance. methodical, exacting, and the way those gear pumps are designed it’s literally impossible to put it back together wrong. i swoon over this engineering design every time

Does this thing ever leak out of the seal on you or no?

No. The pump is still sealed after I put it back together. Sometimes air can come in through the pump into the vacuum if its not put back together right.