Does anyone have experience making cannagars with cannabis leaves? Ive heard of baking fresh leaves in an oven and pressing them in a rosin press but don’t know temps, pressures, times, humidities, etc. I found some info researching it but I’m sure someone here has experience

Best is to get a book and put them inside and flatten them with some weight. When ready to use just remoisturize them. I use bermacoll from leafsonly as my glue, and also helps remoisturize the leaf. The real trick is after its finished you need to jar cure and burp for 2 weeks minimum. The longer it sits the less “green” the leaves taste.

badass I’m gonna give it a try. are some books better than others? like bible paper for joints

I’m thinking of buying a small cannagar kit to try my hand at the process. Do I need to use fresh flower as well or can it be cured?

As far as I can tell, it’s just the leaves that need to be layered and glued together and cured inside some encyclopedias.

Don’t do it with a book that has slick pages. They need to be raw paper, like news paper type paper. They need to be able to absorb some water or your leaves will mold and the book will be fucked up.

After the flower core is wrapped as desired, it is recommended to use a second larger cannagar mold to finish the cannagar after wrapping. Doing so will ensure a tighter end result, with less instance of swelling, shape distortion, or other issues that can arise when drying/curing after wrapping.

Wait, so I have to cure these things in the molds? For like 7-10 days at least? Do I have this wrong? I always thought you pressed your mold, then just tossed the now press-wrapped cannagars into a large glass jar.

@SpookyDistillation
What I have done. Is pack the mold with flower. Let them form for a few days to a week. Remove coat in oil and wrap, you can use something like cigar glue, which is like guar gum (or something don’t quote me on that use google). I’ve never used glue though, just oil. You can use a fine mist to wet your leaves a little if you need to, but I’ve found properly cured leaves are malleable enough. Then let that sit in a jar till I’m ready to smoke it. Never had issues with with them warping or loosing strength. If they are packed tight and leaves are held on good with oil they are solid as fuck.

I made my press out of two pieces of maple. Used a router to cut the grooves. Clamped it and used a drill press to make holes for the skewers. Then took a piece of dowel and put a hole threw the middle the size of the skewer, I used this for packing.

So you don’t need a second mold. But I’m sure that works well. Might make the process easier/better idk.

Get yourself a cigar cutter. You won’t be able to finish one in one go even at a party (probably idk how you smoke) they last many hours even with a bunch of heads. And it’s nice to just cut off the burning bit throw it in a bong or pipe and have a nice clean end to start later.

The one pic I still have. Been many years since I’ve done one.

Edit: the leaves at the rounded end can be a little tricky. Look closely at the pic.

Edit 2: Leira has (or used to) lots of good videos on rolling them. Check him out on ig if you haven’t already. 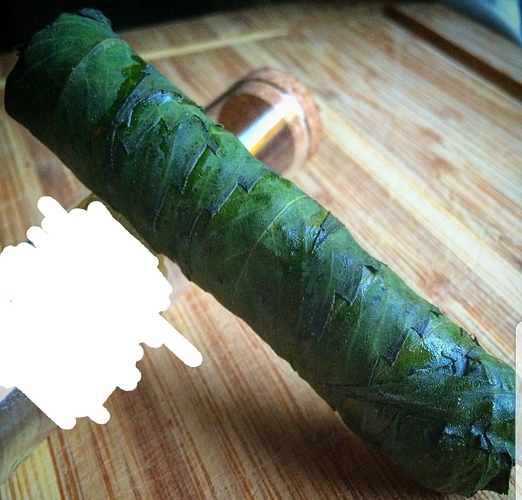 yea I’d use cured bud for sure

@ZenD This helped me understand the time line is long and they do indeed sit in the molds. Someone here mentioned https://www.leafonly.com/ for the glue, and I remember the folks at the NWCannaClub in PDX mentioning they used distillate pretty often as a glue.

Not sure how you’d do it for fan leaves beyond a baking sheet and a big bag, but for buds a Hydrostone from RAW is good for hydrating cannabis, I’m sure it’ll work for the leaves. It’s important to note these stones only need a few hours. I use Boveda for anything beyond that since the hydrostones run out of water.

When I get my first setup I’ll be sure to get the accessories added-on. At the end of the day, I now know that my mold is the bottleneck if I ever want to make more than 1 or 2 at a time. I’ll be waiting a week for the initial mold, then I’ll likely press again in a slightly larger mold again. I’ll have to learn what a good time is for that. Might just be press and release. I have it in my head that it’s going to make it look nicer and be easier than wrapping hemp cord, etc.

Thanks for showing me Leira’s insta. I saw where he did his first cannagar post when he learned to make them in 2015. He’s come a long way it looks like.

If I were to try I would water cure the leaves first.

spreading lies for no reason you pos

So it begins: 7-10 days in the press. Selected leaves in parchment paper and placed in book with ordinary paper pages (can’t use uline catalog lol). 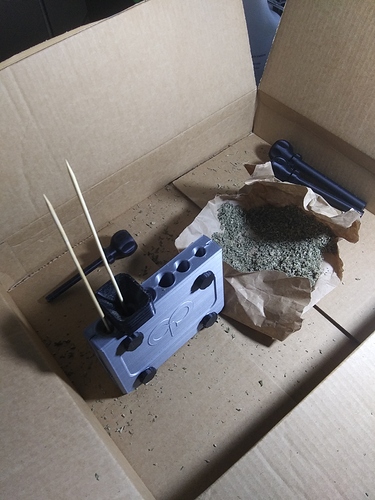 Press was off amazon for $60. I’m afraid the dowels used are made of plastic that will break. Huge weak point in most cannagars press setups. 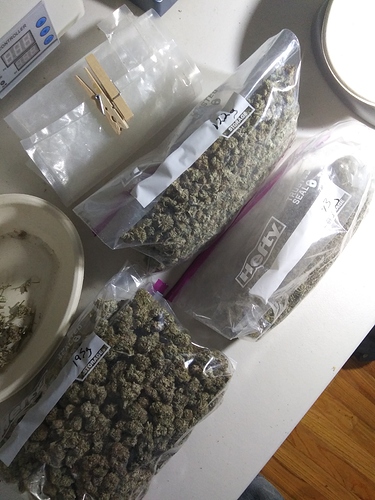