@drjackhughes what’s your thoughts on this? Very interesting the D10 is crystallizing

I’ve been thinking about this for a few days now

One thing we know is the d10 crystal stack is VERY loose. The stuff is almost fluffy. That container in the pic above is about a gram.

Theres got to be another principle going on here causing crystallization on d10.

I bet the OH group causes that tight stack through attraction where as d10 doesnt have that so it doesnt stack the same.

We need to compare like CBN-A to CBN (I’m pretty sure both those can be crystallized?)

I wonder what the difference the OH group would make

CBG likes to crystallize as well… 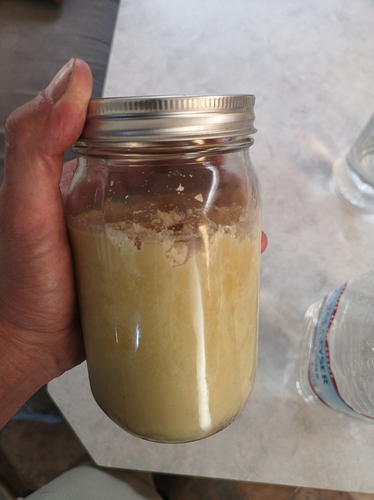 Pure CBN is a white powder. So is CBG.

Yes, and then distilled. This jar of CBG disty autocrystallized to this consistency within a few days.

I wonder how different cbg a would look.

Would pure thc turn to a powder? And if not how come?

Greetings: Actually, (+)-Delta-9-THC and racemic Delta-9-THC will crystalize. Per the definition of a racemate, if the general consensus is correct that the (+) isomer is marginally psychoactive, the racemate will be a bit more than 50% the potency of (-)-Delta-9-THC. And there may be new and unexplored medical benefits that are peculiar to the (+) isomer or the racemate, as interesting new pharmacology for separate or previously unexplored isomers of old drug racemates are routinely explored as grad work at universities and so on. Definitely the processes of manufacture and separation of isomers is becoming simpler and mainstream… There is a patent on the process of manufacture of crystalline racemic THC by addition of solvent and mechanical mixing of the manufactured (+) isomer with an equal amount of (-)-Delta-9 to create the racemate which the patent indicates crystalizes easily and is stable for more than a year at various temps and pressures and more importantly, is stable when admixed with various APIs, excipients and diluents to deliver medicinal benefits of Delta-9-THC to those unable to obtain or unable to smoke or vape THCA at the correct temperature to decarboxylate it, or are unable to obtain non-degraded (-)-Delta-9-THC… I am sorry that I did not make note of the patent number, but Google Patents, if searched for (±)-delta-9-THC with the minus under the plus should take you there quickly. So it would seem that per the patent, because the (+) isomer and the mix of isomers definitely crystalizes that you don’t need the CBN information to support your hypothesis…

So it would seem that per the patent, because the (+) isomer and the mix of isomers definitely crystalizes that you don’t need the CBN information to support your hypothesis…

I want to compare two like cannabinoids to see what the difference of the OH group does for crystallization. I have a feeling that without the OH group you’ll make very loose fluffy crystals ( like the reddish d10 I posted above) where as if you have an OH group itll make a real diamond. This is a hypothesis I’d like to test 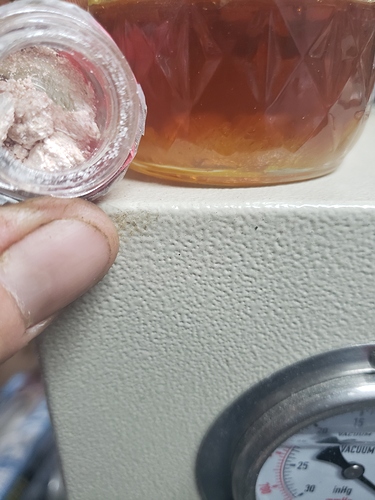 Yes, @Griffin.Labs, that is accurate, and the hydrogen bonding crystallization of CBD and THCa is not missing anything, @8livedevil8.

Hydrogen bonding crystallization in some cannabinoids does not contradict Δ6a,10a-THC (the formal number name for Δ10a-THC) or Δ10-THC’s ability to crystallize, @MagisterChemist. I think the Δ10s just happen to crystallize by a different mechanism. I’m sure you have seen the very fine particulate aggregates that characterize Δ10 or 10a crystallization, as in @Kingofthekush420’s post below yours (post#11). Also, as @8livedevil8 posits, CBN can and does crystallize.

I have thought about this for a while now, and I think the extended conjugation of the Δ10 and the Δ10a double bonds with the substituted benzene ring in the THC molecule may hold the key for them, while the extension of conjugation through both benzene (phenyl) moieties in CBN allow it to crystallize the same way biphenyl does!

I believe that Δ10-THC & Δ6a,10a-THC and CBN might actually crystallize by similar mechanisms. All of them have either a double bond or a benzene ring conjugated with the central benzene ring, allowing for delocalization of the pi orbitals to spread across the edge of the oxane (formerly: tetrahydropyrole) ring moiety, and into that Δ10 or 10a double bond or the benzene ring.

This gives CBN a larger field of flat aromatic magnetism across the majority of the molecule. Basically, like sticks to like by van der Waals forces (remember my post on those?), as long as the repulsive forces do not overwhelm the attractive forces.
The conjugation likewise gives the Δ10 type rings an auspicious chiral bend to the Δ ring, allowing the other Δ10 or 10a molecules to be shaped in a way that allows them to stack by intermolecular attractive forces without various parts hindering or pushing others too far away to allow the large similarly electromagnetic (dipole) fields to rest closely together in a nested fashion.

To understand this, one must know that these are very bumpy, jagged molecules for the most part, when observed 3-dimensionally. Those OH groups’ oxygen atoms might line up with electropositive regions around the very electronegative regions created by the conjugated pi orbitals, exposing the electropositive areas on themselves to further molecules’ electronegative conjugated regions… but only if they can do so with out strongly repulsive parts getting too close together.

They might even nucleate as a hydrogen bonded dimer to start, then lattice out from that point, since OH dimerism happens pretty easily!

Like so: Ar-OH•[Ar-OH•OH-Ar]•OH-Ar
…where the part in brackets is the dimer nucleate.

In summary, organic molecules without 2 OH groups can and do crystallize all the time, and it is usually dictated by the most common conformational isomer being the most prevalent, and just right for intermolecular attractive forces to dominate.

Look at menthol on Wikipedia for a simple example with lots of isomers, but only 1 that is natural and common. It crystallizes like crazy! There are more obvious instances of this, too, like how coconut oil forms crystal looking structures when crystallized (frozen at room temperature) after melting. Slight polarity and induced dipoles go a long way to crystallization when the organic molecules are the right shape or floppy enough to be able to get out of their own way. Polymers and fats can crystallize, too, usually in laminar or spherulite aggregations/agglomerations. I mean, look at that CBG from @future4200! Looks like butter to me!

I hope this helps explain the mystery a bit!

I responded to a friend, @terp_queen_phd, on Instagram today, and realized I forgot to include the modes by which the molecules stack into crystals!

Pi stacking, yes! Aromatic moieties are actually electromagnetic, with the center being more positive and the ring being more negative. The field around a benzene ring is actually a toroidal magnetic field, due to the synchronization of electron spin states… so as long as the rest of the bulky chiral cannabinoid molecule is bent, twisted, or otherwise not too sterically hindered in the regions around the aromaticity, the molecules can interact mainly by attractive van der Waals forces.

Aiding their abilities to crystallize are their much higher stability (lower overall potential energy) than that of the other Δ#-THC isomers, due to their extended pi orbital conjugation.

In the case of CBN, molecules may stack closely offset at the conjugated ring structures, similar to biphenyl, which is actually a more stable conformation than the flat, directly fused double benzene molecule, naphthalene (mothballs).

Great discussion. Bottom line is intermolecular forces and molecule mass are big influences on crystal structure and crystallizion behavior:
-COOH, -OH, and pi stacking are some top contributors. Also, making a compound more rigid and with less conformations can help, too.

I am currently trying to crystallize pure CBN from an oil form. So far neat, in the freezer did not work.

I am currently trying to crystallize pure CBN from an oil form. So far neat, in the freezer did not work.

Lower the PH and see if itll crash

Yes I will explore some aqueous conditions. I will try a lower pH in the mix, too. Thank you.