i ordered the dfy-5/10 from Naomi at Lanphan. After 2 uses (less than 10hrs of use total) the unit quit cooling. I contacted Naomi and she gave me the run around for a week so i have no other choice than to dispute payment. Anyone thinking of dealing with Lanphan should turn and run away. buy American not chinese trash is the lesson i learned this week, what a dissapointment😪

Did the mantle issue ever get resolved as well?

took some time to learn my lesson, stay away from lanphan, lesson learned.

get lied to, run around, missing parts, when you think youre on the same page, just wait untill you receive your items.

sorry for bringing up a old thread, im just pissed off, need to elaborate in the right thread i think.

Did they send you faulty masks with your order?

if i ordered masks, im surprised if i wouldnt recieve diapers instead and be told its the same masks, but with diffrent display

Yeah I got lucky the water bath for my rotovap was the only not working item.

still havnt tested my re501. still in box, dreading that now. - thats was also a big hassle, missing parts, then shitty communication over 20 pictures, few videos and with no outcome,

then shipped me a 2000ml flask afterwards for the re-501 without an adapter, even though i asked 5 times if it fits.

waited from before CNY to get a heating mantle same as USAlab because terry said he had it. i send pictures multiple times were he said no problem. but then i get the old unit i could had bought anywhere the 3 last months.

Now he rather ship it back to china for way over its worth the heating mantle, than giving 50% off because of solely his mistake, he even offered me 50% back, but then wouldnt give it untill next purchase after i agreed and say how hell send the money and remember to pay the fees.

then he wont, because i said he should pay the fees, he lied 10 times to me im sure. 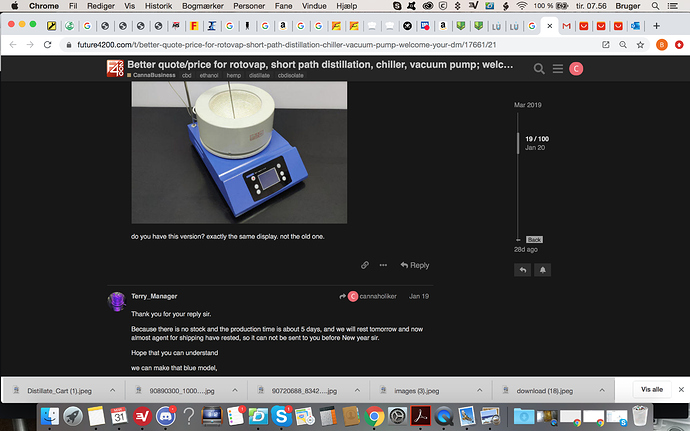 Then even say, its the same model with other display. and all is good blabla…

Well I’m convinced - fuck lanphan. This describes my experience with YHchem except they sent someone out after 6 months of screaming at them.

Again I got my stuff but it was a hassle.

Why deal with leakphang and their BS over there when usalab sells the same stuff. This is already in the USA, a Michigan phone number to call and ask question, some type of warranty, and spare parts.

Did I mention this stuff is already here and NO shipping from china. And its tastes before ahipped out.

I made a thread about this like a year ago or more. Hope you have popcorn

What would cause a mantle to heat past set temp and burn? Terry from lanphan Distillation

I have a Chinese mantle. It burned out on the first use. It said the set temp and probe temp were at 25-30 c and the mantle was smoking, and beeped before I quickly turned it off. It is now charred inside the mantle and the lab smells of burned electrical smell. This is a new mantle. Any input?

USA labs also tests all their gear state side.

I go to USA labs like once a week; they are about as legit as can be; I highly recommend peeps go through them. They will remedy whatever situations arise

Hmmm your not too far from me.

When the apocalypse is over let’s sesh

Lanphan and touch science has a reputation of springing refrigerant leaks becusee they use cheap plumbing. I’ve heard horror stories of ignition turning thier chillers into small flame throwers.