What type of efficiency are you seeing on Wiped Film system?

If 2 liters of 50% CBD crude is going, what can you expect to get out of that in a properly tuned machine?

If your CBD extract (crude) your putting into the system is 50%, than the absolute best return you could get is 50%, as that is the percentage of CBD that exists in your crude going in. If you get more than a 50% return, then you’re getting other cannabinoids or terpenes in your final product. But the return cant be any higher than the total percentage of what ever cannabinoid your chasing, as its all that exists in your starting product and assuming your distilling at a 100% efficiency rate.

Wrong. What % purity is the distillate?

He just said 50% lol. meaning 50% of his two liters of crude is cbd. How can you create another 10% of cbd out of thin air? please share, I’m sure everyone on here would love to know how to make cannabinoids out of thin air.

I took the 60% Randy mentioned as equaling 60% of the two liters giving 1.2 liters of net distillate

Ok mr science guy please explain how you distil cbd to 99% purity. That would sure save a lot of work for isolate.

Redistilling over and over? Even using simple fractional distillation its not crazy hard to hit high percentages if you know what you’re doing. I don’t claim to be a science guy but I do have a couple thousand closed loop runs and distillations in the many forms (wiped film, fractional, short path, steam) close to 1000 times. You want to see water clear cbd? run your hemp through a hydrocarbon system w/ crc and triple to quadruple distill after and youll see its not crazy hard. Just hard to apply to tonnage of hemp as it would take a long time. I promise I wouldn’t comment if I didn’t know what I was talking about. Not the type

So youre saying theoretically?

CBD isolate is extremely easy to make. Ive processed twice for hemp farmers (large scale processing) and anything over 85% cbd crystallizes into isolate with minimal work. and even if my return is 60% because I have LOTS of impurities cause that’s what the other 10% is, impurities. When crystallization is done that 10% will be gone, so even if making isolate. By the time its done that other 10% will be removed. And im back to 50% of PURE CBD isolate because why would I want 10% impurities? I wouldn’t lol

If you run anything through an SPD or WFE 3-4 passes I can about guarantee you’ve significantly degraded your cannabinoids. Certainly not gonna hit 99% THC or CBD

Out of curiosity why do you say that? I’ve never had any issues with either, but I’m curious to hear the issues you had? what type of degrading? In my experience if you do all lab procedures with care, this has never been an issue with me anyway

From my experience with THC, we use very powerful vacuum pumps and multiple cold traps for confirmation. But we can distill at quite low temperatures to avoid degrading cannabinoids. I do know for fact that THC % definitely increases with each distillation. The boiling point of our crude decreases the closer it gets to pure D-9. Years ago I did this test specifically, sending the crude and a sample of 1, 2, 3, and 4 passes through fractional distillation. The crude was 70% thc, first pass 84%, second pass 89%, third 92% and fourth was 95% THC.

The prepare for Decarb is very important

On wiped film units, I can never get my crude residue waste by-product to CBD and/or THC levels below 2%. Considering that’s 2% of what waste was produced, it’s small and not worth my time. When I ran my own products, I would collect this waste until the season would drop and we would have a waste party, which with discharge pumps is just babysitting a few shifts to make only a few liters. On waste weeks, I would see anywhere from 15% to 30% returns (again off of a percentage of what waste had formed before, so still minor). Without running previous numbers I would say that the WFE loses about 1-5% cannabinoids depending on how many times you strip and polish, hold up volume of instruments, transfer losses, ect. I’ve hit really stupid high numbers on a WFE before, 98.6% total cannabinoids, but that isn’t normal. @CEMAINSTRUMENT is correct, thorough decarb is very important. I do single passes but as previously mentioned I just accumulate waste so long as my first pass was 50-55% (or if it was a profitable run or not). My strip settings are stupid high though because I don’t like hearing smell complaints from people so I end up doing terpene re-runs too.

However, when we toll process CBD, we re-run waste twice for high yields on the original run. Distillate is usually 80-95%.

It can go lower but becomes cost ineffective. 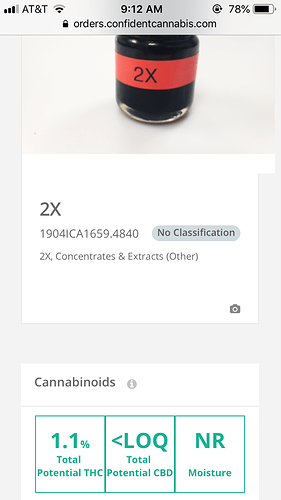 So For a bit of context I can generally get between 95 and 99% total cannabinoids on a second pass short path distillation. With delta 9 being between 85-93% depending on material. Thousands of SPD under by belt on everything from a 100 mL rig to a 50 L SPD. I’ve only done a total of 6 runs on a wiped Film so In the interest of transparency I am only speaking from an anecdotal assumption perspective. Though I feel I grasp the theory fairly well. The vacuum on a wiped film is so much greater that I believe the shorter residence time will lose its benefits after the second pass. As I said this is only a theory of mine, maybe someone like @Kingofthekush420 can weigh in and shoot me down? He knows what he’s talking about when it comes to WFE.

When I’ve done a third pass or a fourth pass and sent off for labs I’ve seen results come back showing as little as 55% cannabinoids. To me this says they isomerized into some yet unquantified cannabinoid. But no proof there either. Color always seems to get better and numbers always seem to get worse. You’ll lose THC and gain CBN, CBC, CBN, delta 8, THCv, CBDv etc… hope this helps answer some of what you were looking for.

Think of spd as a batch process that operates on a bell curve. Wfe is continuous and linear. You can achieve identical results the difference is in technique. Vacuum is a variable that can be held constant with good gear.

Just to weigh in here I’ve put stuff through a WFE at least four times(with the feed stock potency decreasing each time) and still been able to pull +80% d9-thc on decreasing yields. The last passes get pretty dark amber/red though. One thing the WFE really has going for it is that the material only spends 10 - 30 seconds on the evaporation surface as a thin film due to the increased surface area:volume ratio and the wipers provide excellent agitation(think of it like a way more efficient stir bar). As opposed to an hour or whatever at the evaporation temp in a short path flask. Not knocking short path at all btw, they both have their pros and cons.