Cannabis use and covid-19 (risks, precautions, and relevant scientific info)

I have seen a couple Reports of public health authorities speculating that vaping could be reason for the larger percentage of younger patients admitted to ICU (up to 20% of 20-64 years old). While cannabis use was not specifically identified I figure it’s time we make a thread to collect and discuss information regarding cannabis use and covid-19. There are many topics around this and to jump start I am going to list several questions below. I would like to keep this thread full of verified facts and useful info so please refrain from opinions and attacks. Always cite information if possible.
Do cannabinoids when inhaled cause damage or otherwise impair your immune response in your lungs?
Is it possible that cannabinoids or essential oils could potentially break the lipid envelope of the virus and actually reduce viral count? Or could the cannabinoids or essential oil be anti-viral to a degree and reduce ability to infect through some other mechanism?
How does cannabinoids and ACE-2 receptor play a role in infection or progression of the disease?
How does cannabinoids effect the immune system and would this be an overall benefit or detriment?

All I know is that in January/early Feb I developed a dry cough and fever. I smoked weed / dabbed constantly the whole time, and I broke my fever and cough in about 5 days.

Around that same time when everyone had gotten sick and a fever. Including me and everyone i know. Hmm

i had the worst dry cough and fever of my life mid febuary as well. I actually had to completly stop smoking cannabis and concentrates VOLENTARILY for the first time in about 20 years. I literally couldnt catch my breathe. My wife and kid were super terrified. After a day or 2 of not smoking my lungs and everything started to get better. I stopped for a whole 6 days in fear it would come back.

This was by far the worst dry cough i can ever remember. Ive had the flu and pneumonia and i never quit smoking. This kept me up all night coughing…it felt like i had a popcorn kernal stuck at the back of my throat and i just couldnt get it to budge. That is exactly the feeling i had for a week straight. Feel like a million dollars now as that made me see the doctor and get a full panel ran on me for safety. Now im on a diet and exercising even more!.

another weird thing about that cough and fever i had was my appetite was completely there like i wasnt really sick…just my body was fighting an infection.

Same on all those symptoms, popcorn kernel, appetite, . I was only non functional for maybe 36 hours but even then I was smoking non stop. There was a point where it was difficult to smoke but in my stoner mind I was sterilizing my lungs with terps

I actually do think that weed is an expectorant and helps you cough things up. That dry cough is annoying, it’s like an itch you can’t scratch

I got night sweats twice last week, nothing else though. Smoked the whole time, as well as occasional drinking.

Makes me wonder if everyone is gonna get it and there’s some sort of epigenetic factor that affects whether or not you have symptoms.

About a couple of weeks ago I began noticing a tightness and slight pain when taking deep breathes. I never developed any fluid or a cough, but did develop very light chills and a swollen lymph node. Chills went away after a couple of days but the tightness in lungs is stubborn. When I would dab it would get flared up and cause more pain. I considered taking a break altogether, but I think the stress of that could actually weaken my immune system. I have started consuming edibles only and lungs are feeling much better.
Overall I am skeptical this would be corona virus because it was very mild. I felt like maybe 7 out of 10 the whole time. It was barely noticeable. I also started quarantine and limited contact weeks before the government announced it. If it was then I think there’s something more to this story to account for the mildness

Same as @ExTek90 and yourself.

I also had enlarged lymph nodes (under jaw), night sweats (no fever), and a little bit of shitiness in the lungs—although no cough or fever.

I haven’t found anything significant in this provided report or the other, but I feel like the population of this website is skewed to respond more negatively considering the decades of blasting our lungs with cannabinoid/terpene vapor ¯_(ツ)_/¯

On another note there was a mass die off of Saiga antelope in Kazakhstan around 2015. Scientists believe this was due to environmental conditions. They essentially shed their coat then got hit with a cold weather system. The bacteria that is normally present in them flourished because the animals immune system was sapped due to the cold weather. A large percentage of the population died off as a result.
This really highlights the fragility of life, and how closely we live on that balance.

One thing I have found so far to explain the difference in seriousness in symptoms could be due to the initial viral load when infected. If low enough the growth (remember the growth rate is exponential so takes a very long time to ramp up, then goes from like 2 to 2000 in a heartbeat) is so slow your immune system can easily combat the virus. If much larger, the growth rate compounds much quicker and the virus can overwhelm your immune system. Your immune system is like the military fighting a war and there’s always collateral damages, but when things get to panic mode it just drops nuclear weapons.

From September - February, someone in my 3 person family if not everyone,was sick as hell. We chalked it up to our 2yr old starting daycare, as we’ve never experienced anything like that…

Zinc is the preventive key imo.

I have had a croupy cough at the end of winter since I was a kid. This was the year I finally warmed up to the idea of smoking hemp, because when I couldnt stop coughing, the one thing that was an immediate cure was a bowl of cbd kief packed on top of hemp flower. One big hit would stop a cough for hours. My girlfriend experienced the exact same result, after arguing first that smoking something could never make a cough better. It is counterintuitive, to say the least.

And btw I am not saying this to sell anything. Hemp flower is nearly worthless right now, certainly a lot of it sitting around. Based upon my human trial of 2 people, it so far shows promise as a bronchial dialator, especially kief.

Have you ever smoked mullein leaves? I got lucky and have a beautiful patch of mullein growing in my garden. Dried it over the winter. I usually take it as an herbal tea because it acts as an expectant however you can also smoke it.

A tribe member taught me the recipe last summer in Michigan. 1/3 each tobacco, marijuana and mullein. It’s a smooth white smoke that slows your dry cough and gets the mucus flowing out of your lungs.

The small leaves are the most potent, covered in fine hairs.

Also makes great toilet paper! I also grab large fresh leaves when I see them as I hike. Waaaaay back the leaves were dried and used as diapers. 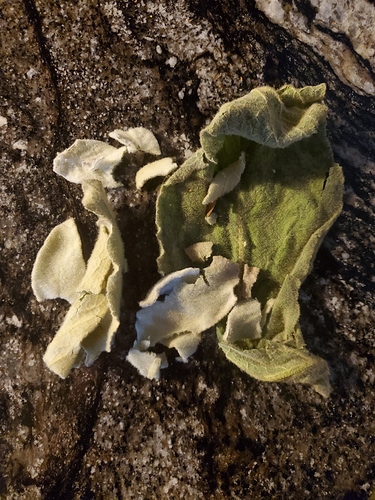 You can roll Mullen blunts. You have to wrap them and let em dry to get them to stay.

Here is a really great website that discusses the use of essential oils applications on viruses. Everything is well written and full of sources. It’s fair to infer that there are a number of essential oils that could potentially be useful against covid-19 but no specific research on that particular strain.

We should all know how aggressive terpenes can be. Good point.

Let’s all keep this in mind.

Anyone never sick? Not trying to be an ass, just asking a question that popped in my head.

Maybe I’m not so crazy